This blog has grown over time, to the point I need to google my own articles ;-). To make it easier to find articles to a given topic, I try to list them here in a more or less organized way. 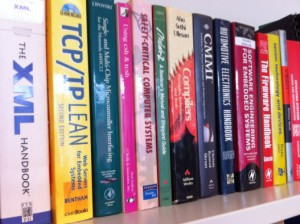 What is a “Compendium”?

“A compendium (plural: compendia; used often in Minnesota: compendiums) is a concise compilation of a body of knowledge. A compendium may summarize a larger work. In most cases the body of knowledge will concern some delimited field of human interest or endeavour (for example: hydrogeology, logology, ichthyology, phytosociology or myrmecology), while a “universal” encyclopedia can be referred to as a compendium of all human knowledge. It could also be referred to as a tome.” (Wikipedia)

About using the build system in Eclipse, compiling files and running builds. It is about using compiler/linker options, how to use libraries or how to set up projects.

How to debug and use the Eclipse debugger. Eclipse provides a common CDT debugger front end, but depending on which debugger back end (GDB, CodeWarrior, …) things are a little bit different. Here it is about debugging, setting breakpoints and watchpoints, and how to use different debugging interfaces.

In my view the best IDE in the world: Eclipse! The articles below should be applicable to any Eclipse based IDE: CodeWarrior, Code Composer Studio, Kinetis Design Studio, Atollic TrueStudio, Emprog Thunderbench…

Everything about Processor Expert and the CDE (Component Development Environment), either in CodeWarrior, Kinetis Design Studio, IAR, Keil or Driver Suite:

Everything about the Processor Expert CDE (Component Development Environment) which is used to create components:

Articles about the Eclipse based products and distributions: CodeWarrior, Kinetis Design Studio, …:

To make an application scalable and easier extendable, most of my projects are running with an RTOS (Realtime Operating System). While I have used different operating systems, I have pretty much standardized on the open source FreeRTOS as it is available for virtually any toolchain and microprocessor:

If using a file based memory system or an SD card, then a file system is used. I’m using in most of my projects the open source and Generic FAT File System from Elm-Chan:

Many modern microprocesor have an USB(Universal Serial Bus) controller on it, and I have different USB host and device classes used in my projects:

If it is about connecting to the internet or to the LAN, then Ethernet is widely used. These posts are about Ethernet:

In my classes and other projects, we are using all kinds of robots. Thh Sumo (or Zumo) bots are a great way to learn robotics and to have a lot of fun:

About the joy and pain of an embedded systems engineer: All about the low level bit stuff, driver development, the C and C++ language and dealing with real time aspects and programming close to the hardware.

Everything about Android and the RIoT board (https://mcuoneclipse.com/tag/riot-board/):

Projects with the amazing products from Adafruit Industries. Adafruit has cool stuff and boards which makes is easy and fun to explore using microcontrollers.

My journey in the world of 3D printing:

Only engineers will understand these posts:

Besides of teaching, tinkering and working under a pile of hardware boards, I love riding my motor bike and taking pictures:

Collection of my favorite quotes.

Diary of an intern’s journey in the world of embedded systems.