In “Tutorial: Accelerating the KL25Z Freedom Board” I used the MMA8451Q accelerometer on the FRDM-KL25Z board in a very primitive way: I’m reading directly some low-level registers from the device through an I2C low-level component. No calibrating, no special device feature setting, only raw values. Since then, things have been evolved: In “Tutorial: Creating a Processor Expert Component for an Accelerometer” I started to create a driver for this accelerometer, and since then a lot more functionality has been added. 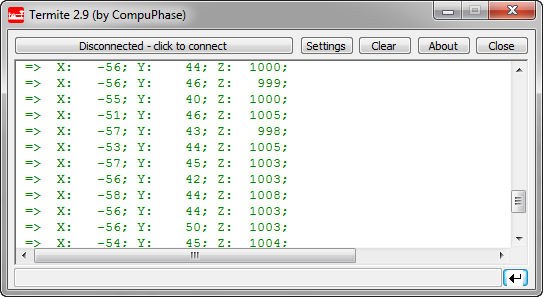 Traced Accelerometer Values to the Shell

I’m using a my Processor Expert driver for the Freescale MMA7260Q accelerometer for multiple years in multiple projects. That MMA7260Q is present on many Freescale evaluation boards, including many of the Tower Boards. The MMA7260Q is an accelerometer with an analog interface, and the driver I have created for it is available on GitHub.

So when I was thinking to extend the MMA8451Q driver, I wanted to have the connection to be compatible as much as possible. That way I easily can switch my existing software to the MMA8451Q. The MMA8451Q has a nice digital I2C interface, with a lot of cool features (tap detection, orientation detection) I consider to use.

The component properties have been extended with calibration values and Shell support:

The optional Shell interface is something I recently have added to the MMA7260Q too: it allows me to inspect/configure the device. More about this later in this post.

💡 I continue to add a command line (Shell) interface to my components, as feedback has been that this is very useful. And I’m using it all the time too: it allows me to work with a device using a command line interface. And with the modular way of Processor Expert components I can enable/disable it on a component by component base.

To simplify the communication with I2C to the device, two more methods (WriteByteAddress8() and ReadByteAddress8()) have been added to the GenericI2C component. This makes e.g. the driver method to enable the accelerometer really easy:

One thing (again!) I was running into was that the Kinetis/ARM is Little Endian, while my brain is thinking (always? most of the time?) in Big Endian mode :-(. As I want the driver to work both with LE (Little Endian) and BE (Big Endian) cores, I created a macro to the driver code to deal with both worlds:

❓ Note sure if there is a better way in Processor Expert CDE to know if the CPU is BE or LE?

Then I can use this in my driver code like this: 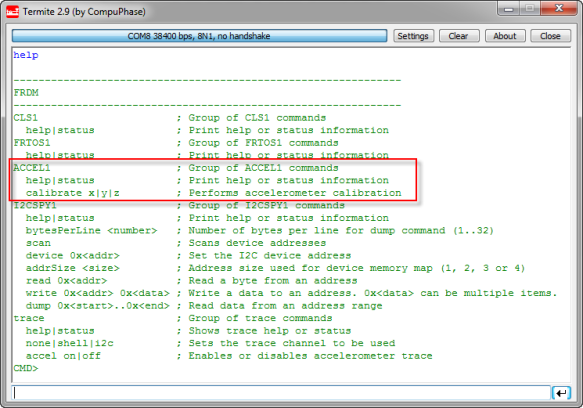 With the status command I get the following information:

As I have added the I2CSpy component as a bonus to my project, it allows me to read/write/dump the I2C memory map of the accelerometer:

💡 Using the I2CSpy I can explore the device settings without the need to download/write special code: I can inspect the bits and settings, write to the device and immediately see the impact. Really cool (at least I think this :-))

As always, things are available on GitHub. This link points to the driver code.

The new Processor Expert driver works very well for me. It does not cover all the features of the device yet (tap detection, low power modes, orientation detection, different g sensitivity levels). So there is still a lot of room for extensions, and this will be added as soon as I find the time :-). But for now, I think it is a good starting point.

42 thoughts on “Extended Driver for the MMA8451Q Accelerometer”