Naturally, I have several project ideas lingering around. No time to make them all (for now). One of it is interfacing the Raspberry Pi camera with a microcontroller. To store the images, I need plenty of RAM on the device, and so far the Kinetis microcontroller did not have that. Finally, Freescale announced the K64F120 a few months back, and my ordered TWR-K64F120M board arrived on my desk, waiting to be used: Finally I get an ARM Cortex-M4F with 1 MByte of FLASH and 256 KByte of RAM :-).

The box has comes with Quick Start Guide, USB cable, RTC battery and the board in an anti-static black card box: 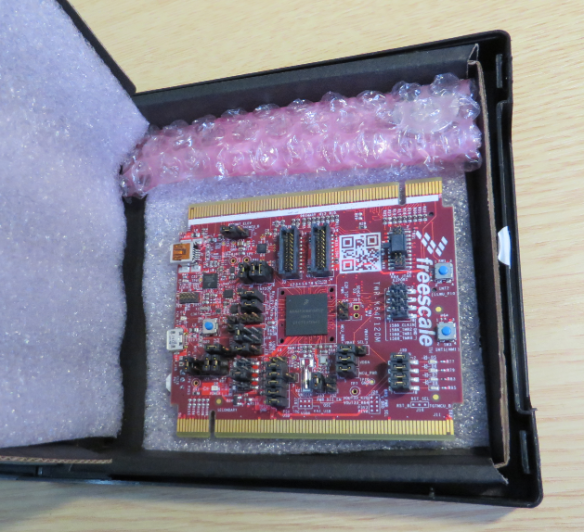 The board features many configuration jumpers, plus the ‘usual’ Tower board components: LED’s, push buttons, potentiometer, accelerometer. I comes with an onboard debug interface (OpenSDA): 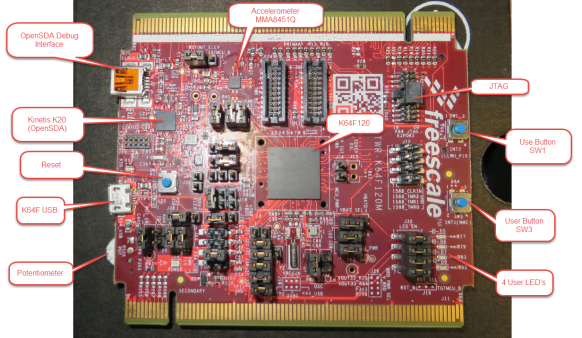 The back side has an SD card socket plus a holder for the battery:

According to the Quick Start Guide, there should be an accelerometer application running on the board, but somehow this was not true (at least for my board): the LED’s did not do anything. There is no CD/DVD with the kit, so I was up to go to the Freescale web page (http://www.freescale.com/webapp/sps/site/prod_summary.jsp?code=TWR-K64F120M) to get my demo software loaded.

The board came with this OpenSDA Firmware installed:

I used my Kepler DIY tool chain, and I was able to debug the board with Segger J-Link through the onboard JTAG connecter, using the V480f Segger firmware with GDB and the default board settings. For unknown reasons I was not able to use the P&E GDB Server or P&E Universal Multilink (still under investigation). The Processor Expert Driver Suite 10.3 already comes with K64F support.

CodeWarrior for MCU needs a service pack added to have support for the K64F: 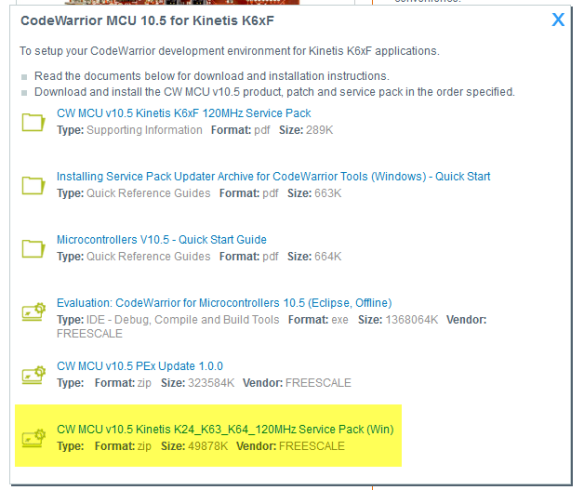 I already had previously installed the CW MCU v10.5 PEx Update 1.0.0. With this, I was able to create and build K64F projects using CodeWarrior. I have the same OpenSDA problem, so this let me believe that Freescale has put the wrong firmware on the board, or that my board might be damaged. Although the OpenSDA K20 microcontroller works for me as USB CDC interface.

Finally I have identified the problem why the OpenSDA debug does not work: My board (RevA, SCH B1) did *not* have J39 installed (but quickstart says it is ON by default :-(). J39 routes the SWD_CLK_TGTMCU:

The jumper is located here (I have put a blue jumper on it):

UPDATE2: There is another jumper missing on the board: J16 should be set on 1-2 position, otherwise a P&E Multilink will not be able to connect to the target, and the reset button will not work:

As there was no demo application for the board available, I started my one using Eclipse Kepler with Processor Expert DriverSuite 10.3, ARM GNU gcc and GDB. The project is available on GitHub. 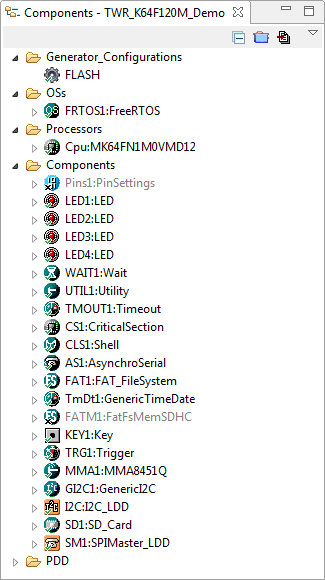 So far the demo includes the following:

The OpenSDA USB CDC is used as console/shell interface (38400 Baud):

The ‘main’ task blinks the blue user LED, and changes the other LED’s according the accelerometer tilt:

If one of the push buttons gets pressed, this is reported on the console:

One thing I lost a lot of time: Somehow I was not able t get the SD card up and running with the K64F120M SDHC interface (see this post). After many hours of debugging, I decided to do it with normal SPI, and voilà: this worked! I still do not know the cause of this, as this works for me for other boards. This might be even a silicon issue as the K64F120 is very new? So for now I have the SDHC support disabled in my application and use the SPI.

Finally I have a Freescale ARM Cortex M4F with enough leg room for my most complex applications. And with this demo application I have now have a board support package running for most parts. The potentiometer is missing (but would not be a big deal). As a larger piece the USB stack is missing, but there has to be another week-end reserved for this ;-). What is strange that the OpenSDA on the board seems not to work properly, and that the demo application on the board is not working out of the box as advertised in the Quickstart Guide? It looks like it has a wrong firmware on the board? At least I’m able to debug it over the JTAG debug port, yet another reason to have an independent JTAG programmer :-).

20 thoughts on “First Steps with the Freescale TWR-K64F120M”