I’m attending the Freescale Technology Forum (FTF) in Dallas this year: As they say here: “everything is bigger in Texas”, that’s the motto of this conference ;-). The conference is packed, and I have a hard time to keep up with all the things going on. My focus is obviously everything around Eclipse and ARM microcontroller. The conference started yesterday afternoon with hands-on labs, and I was in the one were Freescale presented the new ‘Kinetis Design Studio’: a free of charge/unlimited Eclipse tool chain based on Eclipse Kepler, GCC and GDB. Freescale presented their new software library ‘Kinetis SDK’. And: There is a new Freedom board which gets handed out to the attendees: the FRDM-K64F :-).

The conference place is nearby the Dallas airport, and inside the place there is a big ‘Disney like’ glass covered area:

Kind of funny: looks like a park outside, but is covered and inside ;-). 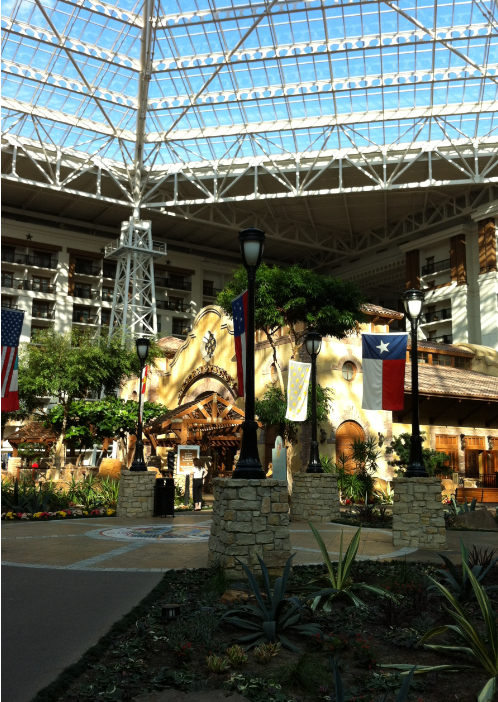 The Kinetis Design Studio is an unlimited and free of charge tool chain offered from Freescale. It is Kepler based, includes a modified GNU ARM Eclipse tool chain (so not exactly what is on the ARM Launchpad), with GDB support for P&E, Segger and OpenOCD. All three are nicely integrated into Eclipse, and the build tool integration are the GNU ARM Eclipse plugins from Liviu which I used in my previous post.

The Kinetis Design Studio supports Windows and Linux (I have used it in the class with Windows), and Mac OS X support is supposed to follow later this year. Both the Segger and P&E support worked very well for me out of the box, while the OpenOCD needs to be used with caution (or with a P&E or Segger probe as backup). I expect that OpenOCD will mature and grow over time, but I would not recommend to use it unless you are very familiar with OpenOCD.

There is still CodeWarrior which supports all the existing Kinetis devices, but going forward all new Kinetis devices will be supported in Kinetis Design Studio. So Freescale is making a step from ‘modified Eclipse with proprietary debugger’ to ‘stock Eclipse with gcc and gdb’. The Kinetis Design Studio was handed out to the class attendees, and is now in a beta phase. You can ask a copy (moderated beta download program) from http://www.freescale.com/kds.

The other announcement made is the new Kinetis SDK. The SDK comes with a friendly BSD licensed set of sources and drivers. It has a HAL (Hardware Abstraction Layer) to use the Kinetis hardware resources. It comes with CMSIS-CORE compliant startup and drivers files and includes a RTOS Abstraction Layer (OSA) for multiple RTOS (bare metal, Freescale MQX, FreeRTOS, Micrium uC-OS).The Processor Expert in Kinetis Design Studio comes with dedicated components which makes it easy to configure and use the SDK.

The SDK is beta right now too, and is available from http://www.freescale.com/ksdk.

When I described earlier the TWR-K64F120M, I was hoping that there would be a Freedom board for that microcontroller. And indeed: at FTF a board is handed out to every attendee :-).

It has the K64F chip on it (ARM Cortex-M4F, 1 MByte Flash, 256 KByte RAM), USB and Ethernet, plus the OpenSDA debug port. But that OpenSDA is running a different bootloader from mbed. Because of the Ethernet connector, the side headers are ‘extended’ ones so if I put a board on top of it, it should not touch the Ethernet connector. The board has two push buttons, a magnetometer/accelerometer, an RGB LED.

What I really love is that there are to (unpopulated) connectors for UART and SPI, so I can put the headers on it and have my HC-06 Bluetooth modules and my nRF24L01+ transceivers working with the board 🙂

A lot of good information, and I have a new board to play with. It will take me a while to consume all the information received, and for sure I need to follow-up with new blog posts once I have explored things even more.

I already have created a demo program for KDS and FRDM-K64F here: https://github.com/ErichStyger/mcuoneclipse/tree/master/Examples/KDS. It includes LED, magnetometer, accelerometer, SD card with FatFS, RNet stack for the nRF24L01+. Ethernet and USB are not supported yet, but will add as soon time permits.

I brought my Zumo Robots, and I’m demonstrating them in the ‘Technology Lab’. Today I will have a presentation about FreeRTOS, so that will be fun too :-).