The great thing with open source tools like Eclipse and GNU (gcc, gdb) is that there is a wealth of excellent tools: one thing I had in mind to explore for a while is how to generate code coverage of my embedded application. Yes, GNU and Eclipse comes with code profiling and code coverage tools, all for free! The only downside seems to be that these tools seems to be rarely used for embedded targets. Maybe that knowledge is not widely available? So here is my attempt to change this :-).

Or: How cool is it to see in Eclipse how many times a line in my sources has been executed?

And best of all, it does not stop here….

NOTE: if using an actual version of the GNU tools, there might be an issue preventing to collect code coverage as explained in this article. Be sure to read the comments section below and check out https://github.com/reeteshranjan/libgcov-embedded.

To see how much percentage of my files and functions are covered?

Or even to show the data with charts?

In this tutorial I’m using a Freescale FRDM-K64F board: this board has ARM Cortex-M4F on it, with 1 MByte FLASH and 256 KByte of RAM. The approach used in this tutorial can be used with any embedded target, as long there is enough RAM to store the coverage data on the target. I’m using Eclipse Kepler with the ARM Launchpad GNU tools (q3 2014 release), but with small modifications any Eclipse version or GNU toolchain could be used. To generate the Code Coverage information, I’m using gcov.

gcov is an open source program which can generate code coverage information. It tells me how often each line of a program is executed. This is important for testing, as that way I can know which parts of my application actually has been executed by the testing procedures. Gcov can be used as well for profiling, but in this post I will use it to generate coverage information only.

The general flow to generate code coverage is: 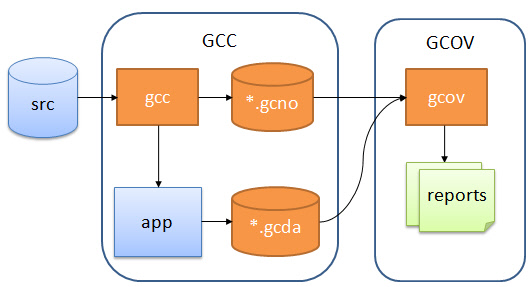 gcc does the instrumentation and provides the library for code coverage, while gcov is the utility to analyze the generated data.

To generate the *.gcno files, the following option has to be added for each file which should generate coverage information:

💡 There is as well the ‘–coverage’ option (which is a shortcut option) which can be used both for the compiler and linker. But I prefer the ‘full’ options so I know what is behind the options.

The option -fprofile-arcs adds code to the program flow to so execution of source code lines are counted. It does with instrumenting the program flow arcs. From https://gcc.gnu.org/onlinedocs/gcc/Debugging-Options.html:

-fprofile-arcs Add code so that program flow arcs are instrumented. During execution the program records how many times each branch and call is executed and how many times it is taken or returns. When the compiled program exits it saves this data to a file called auxname.gcda for each source file. The data may be used for profile-directed optimizations (-fbranch-probabilities), or for test coverage analysis (-ftest-coverage). Each object file’s auxname is generated from the name of the output file, if explicitly specified and it is not the final executable, otherwise it is the basename of the source file. In both cases any suffix is removed (e.g. foo.gcda for input file dir/foo.c, or dir/foo.gcda for output file specified as -o dir/foo.o). See Cross-profiling.

If you are not familiar with compiler technology or graph theory: An ‘Arc‘ (alternatively ‘edge’ or ‘branch’) is a directed link between a pair ‘Basic Blocks‘. A Basic is a sequence of code which has no branching in it (it is executed in a single sequence). For example if you have the following code:

Then this consists of the following four basic blocks: 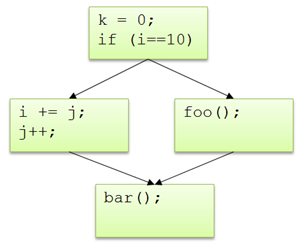 The ‘Arcs’ are the directed edges (arrows) of the control flow. It is important to understand that not every line of the source gets instrumented, but only the arcs: This means that the instrumentation overhead (code size and data) depends how ‘complicated’ the program flow is, and not how many lines the source file has.

However, there is an important aspect to know about gcov: it provides ‘condition coverage‘ if a full expression evaluates to TRUE or FALSE. Consider the following case:

In other words: I get coverage how many times the ‘if’ has been executed, but *not* how many times ‘i==0’ or ‘j>=20’ (which would be ‘decision coverage‘, which is not provided here). See http://www.bullseye.com/coverage.html for all the details.

The second option for the compiler is -ftest-coverage (from https://gcc.gnu.org/onlinedocs/gcc-3.4.5/gcc/Debugging-Options.html):

-ftest-coverage Produce a notes file that the gcov code-coverage utility (see gcov—a Test Coverage Program) can use to show program coverage. Each source file’s note file is called auxname.gcno. Refer to the -fprofile-arcs option above for a description of auxname and instructions on how to generate test coverage data. Coverage data will match the source files more closely, if you do not optimize.

So this option generates the *.gcno file for each source file I decided to instrument:

This file is needed later to visualize the data with gcov. More about this later.

So with this knowledge, I need to add

as compiler option to every file I want to profile. It is not necessary profile the full application: to save ROM and RAM and resources, I can add this option only to the files needed. Actually as a starter, I recommend to instrument a single source file only at the beginning. For this I select the properties (context menu) of my file Test.c I add the options in ‘other compiler flags’:

Profiling not only needs a compiler option: I need to tell the linker that it needs to link with the profiler library. For this I add

to the linker options: 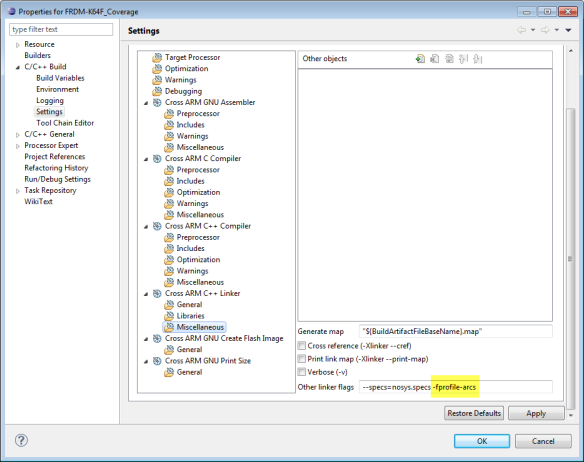 Depending on your library settings, you might now get a lot of unresolved symbol linker errors. This is because by default the profiling library assumes to write the profiling information to a file system. However, most embedded systems do *not* have a file system. To overcome this, I add a stubs for all the needed functions. I have them added with a file to my project (see latest version of that file on GitHub):

💡 In this code I’m using the UTIL1 (Utility) Processor Expert component, available on SourceForge. If you do not want/need this, you can remove the lines with UTIL1. 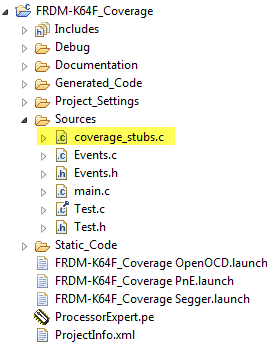 There is one important thing to mention: the coverage data structures need to be initialized, similar to constructors for C++. Depending on your startup code, this might *not* be done automatically. Check your linker .map file for some _GLOBAL__ symbols:

Such a symbol should exist for every source file which has been instrumented with coverage information. These are functions which need to be called as part of the startup code. Set a breakpoint in your code at the given address to check if it gets called. If not, you need to call it yourself.

❗ Typically I use the linker option ‘-nostartfiles’), and I have my startup code. In that case, these constructors are not called by default, so I need to do myself. See http://stackoverflow.com/questions/6343348/global-constructor-call-not-in-init-array-section

In my linker file I have this:

So I need to call this function as one of the first things inside main().

The other aspect of the coverage library is the heap usage. At the time of dumping the data, it uses malloc() to allocate heap memory. As typically my applications do not use malloc(), I still need to provide a heap for the profiler. Therefore I provide a custom sbrk() implementation in my coverage_stubs.c:

❗ It might be that several kBytes of heap are needed. So if you are running in a memory constraint system, be sure that you have enough RAM available.

The above implementation assumes that I have space between my heap end and the stack area.

❗ If your memory mapping/linker file is different, of course you will need to change that _sbrk() implementation.

Now the application should compile and link without errors.Check that the .gcno files are generated:

💡 You might need to refresh the folder in Eclipse. 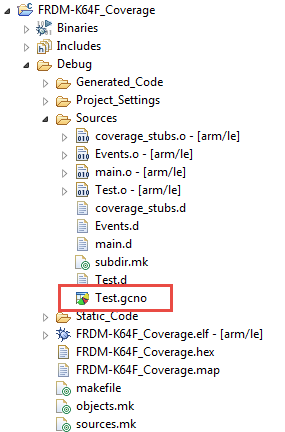 In the next steps I’m showing how to get the coverage data as *.gcda files to the host using gdb.

Using Debugger to get the Coverage Data

The coverage data gets dumped when _exit() gets called by the application. Alternatively I could call gcov_exit() or __gcov_flush() any time. What it then does is

With _open() I get the file name, and I store it in a global pointer so I can reference it in _write():

In _write() I get a pointer to the data and the length of the data. Here I can dump the data to a file using the gdb command:

I could use a calculator to calculate the memory dump range, but it is much easier if I let the program generate the command line for gdb :-):

That way I can copy the string in the gdb debugger:

That command gets pasted and executed in the gdb console:

After execution of the program, the *.gcda file gets created (refresh might be necessary to show it up):

Repeat this for all instrumented files as necessary.

To show the coverage information, I need the *.gcda, the *.gcno plus the .elf file.

Then double-click on the gcda file to show coverage results:

Press OK, and it opens the gcov view. Double click on file in that view to show the details:

Use the chart icon to create a chart view:

Video of Steps to Create and Use Coverage

Instrumenting code to generate coverage information means that it is an intrusive method: it impacts the application execution speed, and needs extra RAM and ROM. How much heavily depends on the complexity of the control flow and on the number of arcs. Higher compiler optimizations would reduce the code size footprint, however optimizations are not recommended for coverage sessions, as this might make the job of the coverage much harder.

I made a quick comparison using my test application. I used the ‘size’ GNU command (see “Printing Code Size Information in Eclipse”).

Without coverage enabled, the application footprint is:

With coverage enabled only for Test.c gave:

So indeed there is some initial add-up because of the coverage library, but afterwards adding more source files does not add up much.

It took me a while and reading many articles and papers to get code coverage implemented for an embedded target. Clearly, code coverage is easier if I have a file system and plenty of resources available. But I’m now able to retrieve coverage information from a rather small embedded system using the debugger to dump the data to the host. It is not practical for large sets of files, but at least a starting point :-).

I have committed my Eclipse Kepler/Launchpad project I used in this tutorial on GitHub.

Ideas I have in my mind:

90 thoughts on “Code Coverage for Embedded Target with Eclipse, gcc and gcov”