Many compilers offer a way to allocate a variable at an absolute address. For example for the Freescale S08 compiler, I can place my variable at a given address:

This is very useful (and needed) e.g. if the hardware (like USB) needs a buffer at given address. The advantage of the above (non-ANSI and thus not portable) syntax is that I can define a variable at an absolute address, without the need to allocate it in the linker.

I wanted to do something similar with gcc for Kinetis/ARM, and searched many forums on the internet. Obviously, I’m not alone with this question. The solution I have found comes close to what I use e.g. for the S08 compiler.

The idea I use here is to put the variable with a special section name, and then place it in the linker file at an absolute address.

💡 I have not found a way to place a variable at an absolute address *without* to modify the linker file? Post a comment if you know a better solution!

Gcc uses the __attribute__ keyword as a way to ‘mark’ variables with special attributes. It allows me put my variable into a special section, which I name here ‘.myBufSection’:

Another useful thing is: I can specify the alignment of that variable with an __attribute__ too:

With this, my variable will be put into a section named ‘.myBufSection’, and it will be aligned on a 512 address boundary.

The next step is to place that section at an address in the linker file. E.g. for the KL25Z of my Freedom board, I have this memory mapping in my linker file:

I could split my m_data block and create my memory block for my variable to place at 0x2000’0000. An easier way is to simply place my section from above into the SECTIONS block like this:

With above linker statement, I define an absolute start address for all my variables in the section named .myBufSection, and place it into the m_data memory block. Additionally I need to use the KEEP keyword to tell the linker *not* to dead-strip my variable, in case I do not reference it from my code.

After linking, now my object should be at the given address. While looking at the linker map is always a good idea, I have found another nice tool which comes with the GNU suite: nm. With nm I can examine binary files like the ELF file produced by the linker. In CodeWarrior for MCU10.3, that command line utility can be found in

I could configure to run it as post-link step in CodeWarrior, or simply use it from the DOS command line prompt: 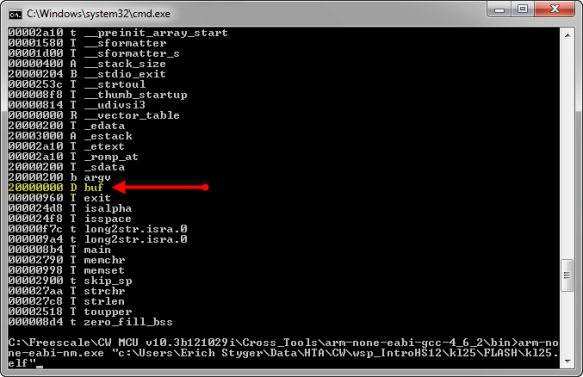 nm shows my variable at the absolute address

It would be good if there would be a way to avoid the linker file change, but I have not found another or better solution.

63 thoughts on “Defining Variables at Absolute Addresses with gcc”