The problem was that I received a “Failed to resume target process., Downloading binary to target…’ error message:

This Freescale forum thread has finally lead me to the solution: a wrong USBDM device ID for KL05Z present on the FRDM board :-(.

USBDM comes with standalone flash programmers, and one of it is for ARM based devices:

The Flash Programmer has a ‘Detect’ functionality, it was not able to detect the KL05Z32 on the FRDM-KL05Z board: 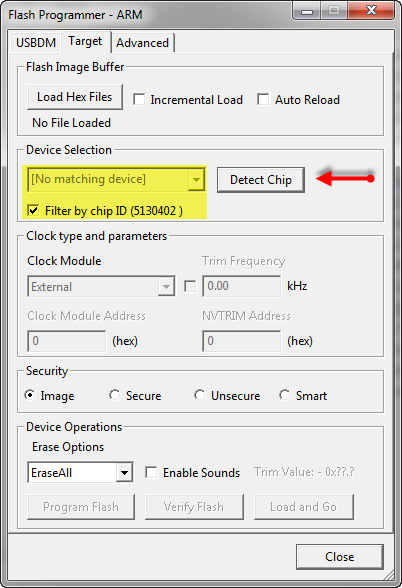 The good thing is that it reports the chip ID. After searching around, I realized that the ID mapping is described in the arm_devices.xml file inside the USBDM installation folder:

That file has the KL05Z32 listed as

With this, the device is properly detected:

And with this change, CodeWarrior for MCU10.3 is successfully debugging the FRDM-KL05Z with USBDM: