I’m working now on a lecture robot project using my Freedom Board. And for this I need a wireless communication. I already have IEEE802.15.4 (SMAC) working, but I wanted to add Bluetooth as a low-cost option. I have found an inexpensive Bluetooth module which is available for only around $4-8 which we use in another university class project. The module is an AT command module: that means the microcontroller communicates with AT serial commands with the module, and the Bluetooth stack itself runs on the module. In a minimal configuration I only need 3.3V, GND, TX and RX plus a CMD (Command) pin:

I have found several sources (wavesen.com, suntekstore.com, e-gizmo.com, dx.com) selling that module. Browsing the web shows other sources, although sometimes it is hard to tell which module they are using. I have found one at Seedstudio, but not sure if this is the same, as they hide the module used with metal shielding.

There are several variants of this module available:

Usage of the module is very simple: out of the box I can connect to the module using a virtual COM port, and start sending/receiving UART commands.

To for early test connections, I have soldered connectors to the board:

That way I can easily connect it to any pins on the Freedom board: 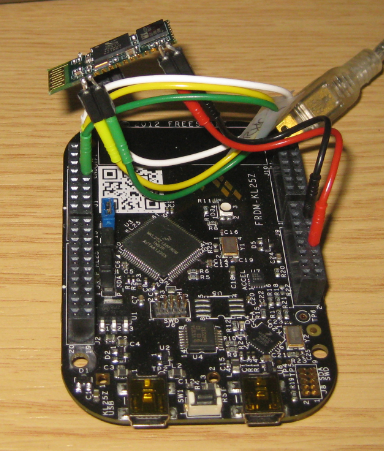 Bluetooth Module Connected to the Freedom Board

That’s of course only a temporary solution: I have created an adapter print in Eagle which takes advantage of the other pins of the module (status LED’s and I/O pins): 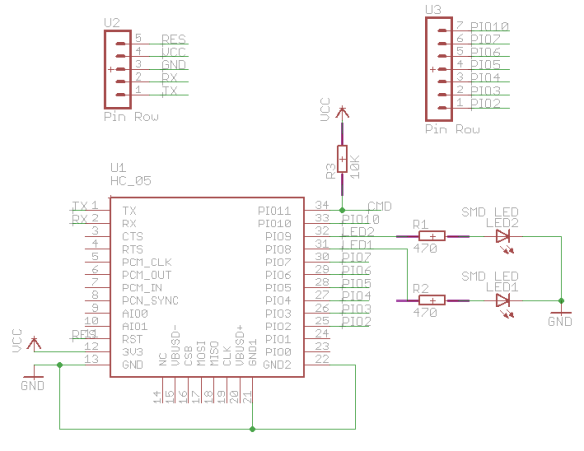 Rev 0.1 of the board is in production now. If everything works out, then I’ll have a good adapter board I can use for many projects. A board layout for the Freedom board as ‘Arduino’ extension board is in the works too.

To simplify usage of the module, I have created a Processor Expert Bluetooth component. It has methods for all the AT commands:

In the properties the Serial interface plus the optional CMD (Command) pin is configured:

The component help comes with links to vendors, and has all the important data sheets included :-):

The status command retrieves information from the module:

In addition to using the component methods, it features to send any AT commands directly:

Once connected, commands can be sent to the other side using the ‘send’ command. And commands sent from the connected device are parsed by the shell.

In the example below I’m connected over the Bluetooth bridge to the Freedom board and can turn on/off/etc the LED’s on the board:

The project features a shell and serial bridge over UART. That way a notebook can communicate with the board over bluetooth as it would be locally connected. The software really only takes a few lines of code in Shell.c:

81 thoughts on “Bluetooth with the Freedom Board”