FreeRTOS V7.1.1 was released beginning of May 2012. Finally I had some week-end time to integrate the changes and upgrade the Processor Expert component for it. V7.1.1 comes with smaller and larger changes. This includes maintenance and better support for various ports. One change is the removal of CLI from the original FreeRTOS distribution, an extra port macro and one trace hook macro.

The SourceForge FreeRTOS had a nice command line driver and interface included in the earlier version. This has now been moved under a separate (GPL) license on http://www.FreeRTOS.org/plus. This means that it is not free of charge any more, except if used with a NXP microcontroller. Too bad, and very bad for anyone not using NXP. Because of this, I keep the previous (under LGPL and free of charge) version of the command line interface in this Processor Expert port. 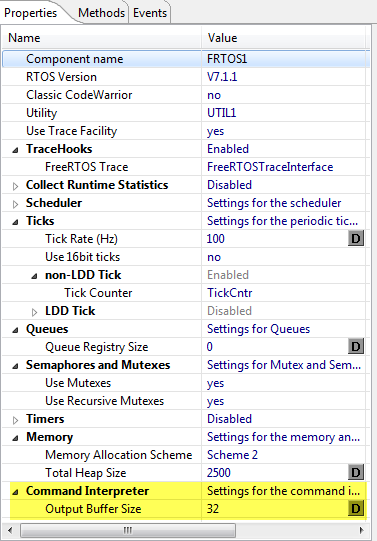 There are now two other API functions:

This is a new callback macro for the port implementation. Right now this is not used for the Freescale ports.

This is a new trace macro which will allow more information in the next release of FreeRTOS+Trace. With the release of a new version of the Percepio trace I will extend the Trace Hooks to take advantage of it.