In “Optimizing the Kinetis gcc Startup” I stripped down the fat of my startup code. Now time to add some useful things. And what does a microcontroller like the KL25Z on the Freedom FRDM-KL25Z board have: Pins! And this means I have bits to set and read :-).

So this post is about how to use digital I/O pins on the KL25Z to either turn on or off, or to read in values. In the LED tutorial I used my LED component to control them, but of course it is possible to do that kind of thing on a lower level: BitIO_LDD.

Note: I assume that you are familiar with the basics like creating a Processor Expert project, generating code and debugging it. If not, please see one of my earlier tutorials: Enlightening the Freedom Board

BitIO_LDD for an Output Pin

The BitIO_LDD is included in CodeWarrior for MCU10.3. Adding that component to the project is easy from them Components Library View:

❗ There is as well a BitsIO_LDD component available (notice the ‘s’). This one is able to deal with multiple bits in a port, but we want here just to do it with a single bit.

This adds it to my project:

Time to configure it! I map it to the Red LED on my FRDM-KL25Z board which is connected to pin PTB18. For this I use the ‘Expert’ mode, give it a name (“RED”), assign it to PTB18, name the (optional) signal name and set it to output. I enable ‘Auto Initialization’ so the Processor Expert startup code initializes the pin for me: 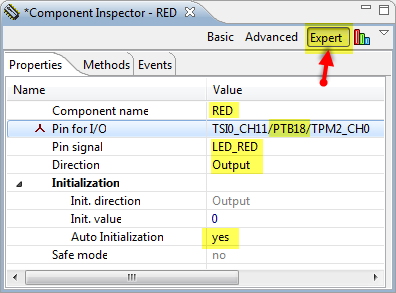 Time to try it out! For this I add two lines of code to the main() routine:

❓ Wondering about the RED_DeviceData parameter? The logical device drivers (LDD) components in Processor Expert need this. I will explore things how this can be optimized later on as the overhead caused by this is really not good even for such a powerful ARM Cortex-M0+ microcontroller.

Time to create code (selecting the ProcessorExpert.pe file and context menu t ‘Generate Processor Expert Code’, build it and download it. The code should turn on the RED led, and then turn it off. Simple as that :-).

BitIO_LDD for an Input Pin

Now I want to use a pin as input. As the FRDM-KL25Z has no dedicated button, I’m going to use the Reset button (SW1) instead which is connected to PTA20:

SW1 on the FRDM-KL25Z Board

Again I add a BitIO_LDD to my project and configure it:

Now I have a little problem, as PTA20 is configured as reset pin for the CPU. So I need to tell the CPU component that I’m using the reset pin for my purpose. For this I select the Cpu in the Components view and use the Inspector menu: 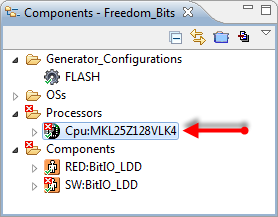 Here it tells me again that I’m ‘double booking’ that pin: 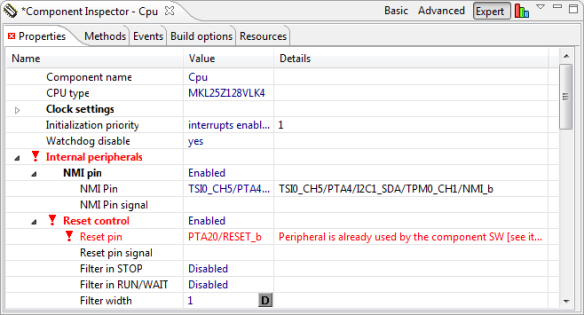 What I need to do is to disable it:

💡 Disabling the Reset Pin has other impact too, see “How (not) to Secure my Microcontroller”

But wait: there is one more setting: 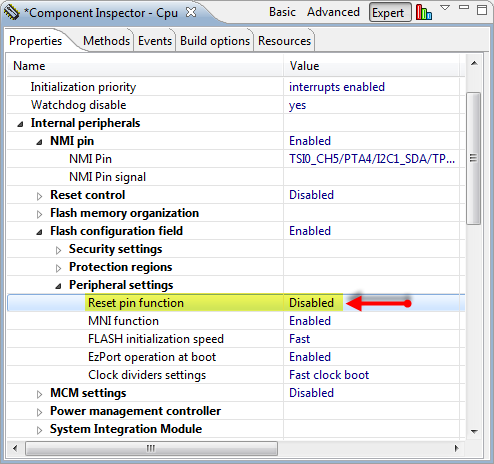 Time to test it in my code.

I change the above code in main() now to turn on the LED if I press the button, plus to prove that pressing the reset button does *not* cause a reset, I turn on the green LED for a second (using the Wait component):

While reset/SW1 is not pressed, the blue LED is on:

Blue LED on if button is not pressed

Pressing the reset/SW1 button turns the red LED on:

I know now how to configure pins for input or output, and how to set or read them. But there is more you typically can configure. Things like pull-up or pull-down resistors, slew rates or driving strength. All these settings are missing in the above components. But they are available in the non-LDD (Logical Device Driver) land :-(.

💡 For other Processor Expert supported (non-LDD) cores (like the S08), such hardware settings can be configured in the BitIO component.

So it looks like these important settings are missing here. I was lucky that my reset pin in the example above had a pull-up resistor on the board. But I know that the hardware supports an internal pull-up (or pull-down) resistor. So it should be possible to establish a ‘resistor-less’ switch between GND and pin 14 on the J2 header on the FRDM-KL25Z board:

D15 is connected to the PTE1 pin on the KL25Z. And I want it as an input with an internal pull-up. So how to configure it? The trick is to use Init_GPIO with pin sharing.

First, I add a normal BitIO_LDD for my new switch SW2, and configure it for PTE1: 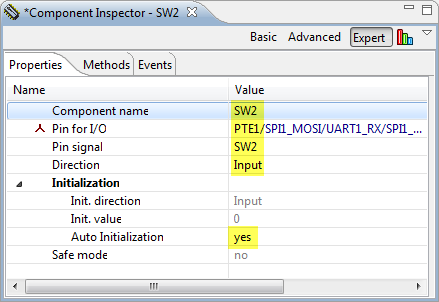 I’m now going to configure the hardware (internal pull-up) in an Init_GPIO.

Init_GPIO is a component which only performs initialization, nothing else. So I add it to my project:

Next, I configure it to use PTE1 with enabled pull-up resistor: 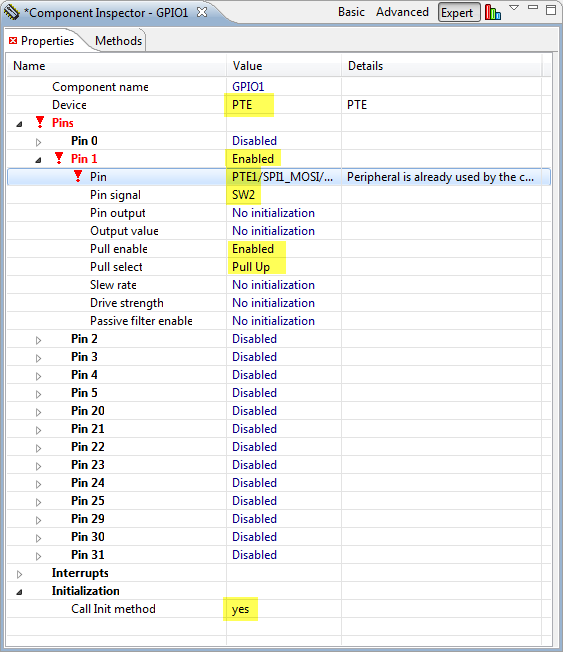 Init of PTE1 with Error

But: it reports an error as PTE1 is already used by my BitIO_LDD component. How to solve this? The solution is to configure the pin for ‘pin sharing’: this means that several Processor Expert components can share that pin. To enable pin sharing I select the context menu on that pin:

Now notice the subtle color change of that icon which can easily be missed:

But: it means that it is enabled for sharing, and the error from above is fixed :mrgreen:.

Time to generate Processor Expert code and to update my source:

Time again to try it out on the board: it will turn on the green LED for a second and then turn it off. Then the LED will be off. If I press SW1, the led will be red (as above).

LED off with open switch

If make put PTE1 to ground with a wire (emulating a switch), the LED will turn blue: 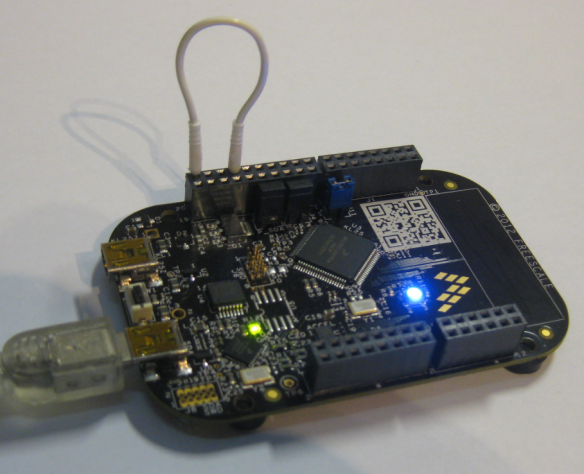 Blue LED on with switch closed

Doing Bit I/O really is easy with the Eclipse based CodeWarrior for MCU10.x. The project and source files created and discussed is available on GitHub here.

PS: As noticed earlier: The LDD approach comes with some avoidable overhead. I preparing a follow-up article on this how to get things optimized, so it fits my needs and expectations. Stay tuned …

82 thoughts on “Tutorial: Bits and Pins with Kinetis and the FRDM-KL25Z Board”