Segger releases often new application and firmware updates. If I install an IDE like the Freescale Kinetis Design Studio, it comes with that firmware version available at that time. How to take advantage of a new Segger release?

When Kinetis Design Studio was released back in May 2015, it included the Segger version V4.98b of Segger firmware and tools. This article is about to update to a newer version. The same approach works as well for other Eclipse IDE’s using the GNU ARM Eclipse plugins.

To to https://www.segger.com/jlink-software.html and download the latest version (Windows, Mac, Linux) (v5.02 at the time of this writing):

Then run the setup with the default settings. It is possible to have multiple versions of the Segger software installed, each will be in its own sub-folder. E.g. for V5.02 on Windows it is

On Windows, the Segger J-Link installer is able to detect various tool installations. To my knowledge it checks entries in the Windows Registry to know the installations. In that dialog, I can select which ones I would like to update:

On non-windows machines or if that thing with the registry variable does not work, it is still very easy to update KDS. Or use the following approach if you want to keep multiple versions.

The Segger files are in the ‘segger’ directory of the Kinetis Design Studio Installation:

So I can update that folder with a new Segger version. I recommend to make a backup of the folder first.

Remember the path where the Segger J-Link installer has installed the files?

I can copy the content of the folder into the ‘segger’ folder of my Kinetis Design Studio folder:

Using the GNU ARM Eclipse plugins, how does the plugin find the Segger GDB binaries? By default, the following path to executable using Eclipse variables is used in the launch configuration settings of the debugger:

Two variables can be inspected with pressing the ‘Variables…’ button in that dialog: 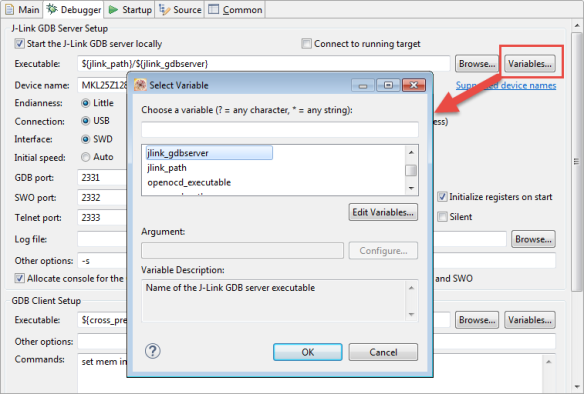 Using the ‘Edit Variables’ button shows me the details:

Here again I can see that it is using the ‘segger’ folder inside my Eclipse installation  as ${eclipse_home} points to the ‘eclipse’ sub-folder of my KDS.

If for whatever reason I would like to use the earlier version of the Segger GDB, I can create a new variable or using my backup folder that way:

Sometimes I want to use a newer version of the Segger J-Link software. It is easy to update an existing Eclipse IDE installation. For Kinetis Design Studio, the ‘segger’ sub-folder of the KDS installation folder does need to get updated.