Run and Debug in Eclipse

Clearly, I’m not immune to the ‘déformation professionelle‘. I very rarely use ‘Run’, because it simply does not offer much value compared to ‘Debug’ during development. If using ‘Run’ and then there is a problem, I have to ‘Debug’ anyway, why not ‘Debug’ from the beginning? It is simply not an efficient way to work for me. Or I’m missing something?

So let me jump over my own shadow, and I show how a ‘Run’ can be done with a ‘Debug’ configuration: The differences between ‘Run’ and ‘Debug’ are:

So to do the same as ‘Run’ in a ‘Debug’ configuration, I need to set it up that it does not stop at main. 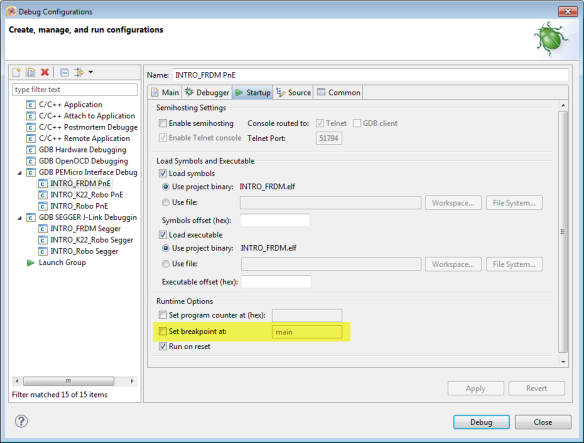 Same thing for the Segger J-Link connection: disable that it sets a breakpoint at main: 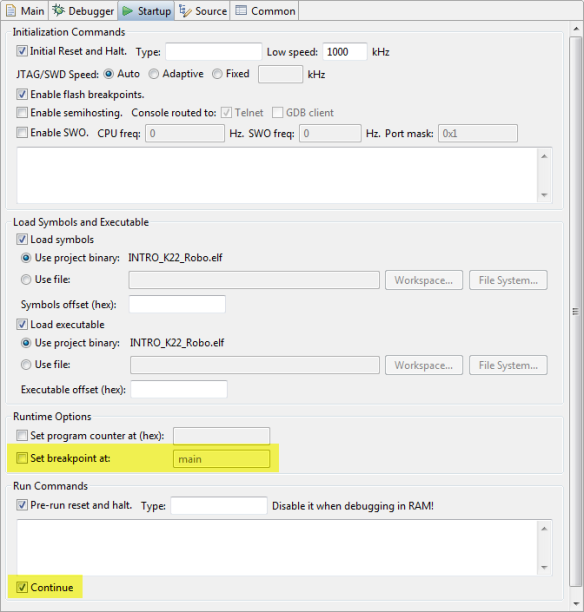 So while the settings above make the program run, there is still one difference between the original ‘Run’ configuration: in the debug view the thread is still shown:

Which is great for me, as I can halt the target and start debugging. However, if I want to do another ‘run’, I need first to terminate the debug session. I can do this with the following settings (Segger J-Link GDB server):

Segger GDB commands to run the target and to disconnect

With this, right after the reset, it sends the ‘monitor go’ command to the J-Link to run the target, followed by a ‘disconnect’ which terminates the Eclipse debugging session:

Now I can load the program to the board, it runs the application and automatically disconnects the debugger.

It is possible to emulate the ‘Run’ configuration with a modified ‘Debug’ configuration. Basically it simply means not to set a breakpoint and run the target. To extend this with disconnecting from the target, this requires extra gdb or monitor commands, and I was able to make it work for example with the Segger J-Link.