The good thing with the internet is: it allows engineers to collaborate. And here is an example: Marc is a reader of this blog had a problem with the I2C hardware of a Freescale Kinetis ARM microcontroller. In his case, the I2C bus could be stuck, and there seems no way to reset it with the I2C hardware on the microcontroller. So a solution would be to reset it with software instead. 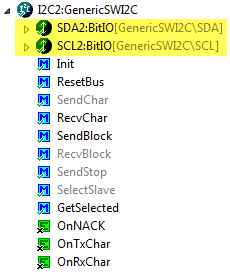 I had created a software ‘bit banging’ I2C driver which can be used if there is no hardware I2C driver (see “Bit Banging I2C“), but it was not available for Kinetis and with the “Generic I2C Driver” component. But to overcome I2C issues, Marc wanted that software I2C driver for Kinetis, plus a function to reset the bus by software. He used my work as a starting point, fixed some issues and greatly extended it, and he contributed it back so everyone else can benefit :-).

“Bit Banging” means that instead using dedicated hardware, normal general purpose I/O pins are used to implement a protocol like I2C or SPI. I had to develop such a bit banging I2C driver because Processor Expert did not implement a hardware driver for microcontroller like the Freescale ColdFire V2 MCF52259 :-(. Having a big banging driver is not as fast as using the hardware I2C, but for slow devices this is not much of a problem.

The code below shows how to receive a byte using bit banging:

As for myself, I have faced bugs in the hardware too (see “KL25Z and I2C: Missing Repeated Start Condition“). I was to solve my problem with the information from the errata and using special clock configurations. Still there might be other problems with hung up I2C bus. This does not have to be necessarily a bug in the I2C silicon implementation, but could happen with external I2C devices going wild. Then it could be difficult to get that back under control (except you can perform a power-on reset). Or to send 9 clocks followed by a STOP condition on the bus (see this forum post). But this kind of detailed control might not be availble in the I2C hardware, so bit banging is the solution here.

Marc added a function to the driver to reset the bus in the GenericSWI2C component:

This method tries to reset the bus with 9 clocks followed by a STOP. It returns TRUE if the bus is IDLE afterwards, or FALSE if the bus still hangs:

The other contribution from Marc is to perform a yield if the driver is waiting: 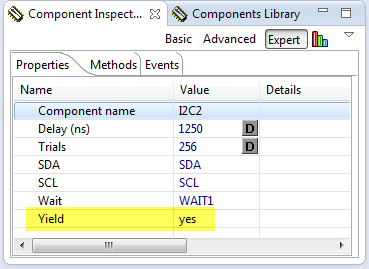 The software driver needs to wait in several places. If using an RTOS like FreeRTOS, and if this attribute is set to ‘yes’, it will perform a task yield. For this the macro OSYIELD() is defined in the driver:

The driver will automatically detect if an RTOS is present and generates the appropriate driver code.

Bit-Banging the I2C protocol is not the fastest way, but because very generic it has a lot of advantages: it gives me complete control over the communication bits, and I can use any general purpose Bit I/O pins and I’m not limited to the I2C hardware. Sure, that software bit banging I2C driver is not catching every special case, but worked for me very well with my hardware. So I hope it is useful for you too. And with the extensions contributed by Marc the driver is now even more complete and useful.

The updated components are available on GitHub, see “Processor Expert Component *.PEupd Files on GitHub” how to load them.

Thanks again to Marc for his contribution!