Many tool chains and linker are able to produce S19 files, such as with the GNU tools it is the ‘objcopy‘ which does this job (see “Binary (and S19) Files for the mbed Bootloader with Eclipse and GNU ARM Eclipse Plugins“). But these tools usually cannot handle the special cases. For example on the Freescale Kinetis K64F my serial bootloader (see “Serial Bootloader for the Freedom Board with Processor Expert“) had a problem with these lines in the S19 file:

The interesting thing was that my bootloader worked fine, except the flash was not correctly programmed :-(. With a lot of trial-and-error, I found out that the problem is because the blocks did not start on a 64-bit aligned address at 0xC30C. So somehow the blocks needs to be 64-bit (8 byte) aligned with using the Flash Memory (FTFE) module, and 8 bytes need to be written in one cycle. When I merged the ‘not aligned’ lines in the S19 file, everything worked fine :-).

When I have found this out, issues reported by others suddenly made sense too, and I believe similar reports/requests in the Freescale community are triggered by that.

So I have two options:

I prefer option 2, as this does not blows up my bootloader code. Instead, I can easily align the S19 files with the SRecord (http://srecord.sourceforge.net/) utility (see “CRC Checksum Generation with ‘SRecord’ Tools for GNU and Eclipse“).

−Output_Block_Size number
This option may be used to specify the exact number of data bytes to appear in each output record. There are format-specific limitations on this value, you will get an error if the value isn’t valid.

Assuming that my S19 file has the starting memory blocks aligned to 64-bit (which has to be the case), specifying an Output_Block_Size to a multiple of 8 bytes will make sure that every line in the S19 will be 8 byte aligned.

There is a second related option to that:

From time to time, with large files, you may notice that your data records are spit unexpectedly on output. This usually happens where record lengths are not a power of 2. If this bothers you (or your comparison tools) this option may be used to repack the output so that SRecord’s internal block boundaries are not visible in the output.

So using both options should make sure that my blocks are properly aligned.

For example I can use this command line

and it will transform/align my S19 file so everything is 64-bit aligned: 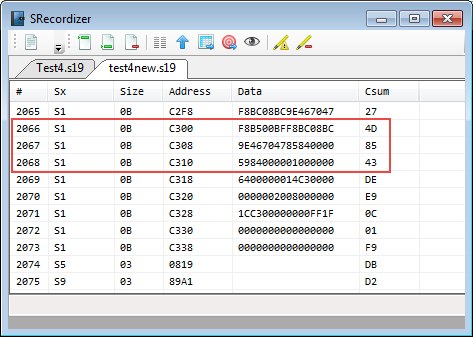 And I can easily have multiple 8-byte blocks on one line too to reduce the overhead in the file:

64bytes in a line

Now it is an easy step to have this integrated for example into the Eclipse build process as a post-build action (see “Executing Multiple Commands as Post-Build Steps in Eclipse“).

Certain flash devices need special alignment. It is easier to produce properly aligned S19 files than making a bootloader more complex. The srec_cat SRecords tool makes it easy to control the size and alignment of the records.