While working on a project for the FRDM-K20D50M, I faced a problem: I was running out of SRAM for my application. The GNU linker reports: “section `.bss’ will not fit in region `m_data'”: 😦

bss will not fit in region m_data

But my device has 16 KByte of SRAM, and I knew I use much less than 10 KByte. So what is the problem?

The Freescale K20 on the FRDM-K20D50M has 16 KByte SRAM. Unfortunately that 16 KByte are splitted up into two 8 KByte memory blocks in the linker file:

So the linker file defines the m_data and m_data_20000000 range. Because the memory controller of the K20 can access the two areas independently, an object shall not cross that boundary at 0x2000’0000. Consequently, no object allocated by the linker shall cross this magic boundary. The real pain is that the GNU linker is not able to distribute objects into different memory segments :-(. Instead, I need to do this by hand (ahhhrgggg!). The result is that only half of SRAM is easily available on Freescale Kinetis K devices :-(.

❗ The ARM Cortex-M0+ on the Kinetis L series (e.g. FRDM-KL25Z) does not have this memory boundary. There I have the 16 KByte as continuous memory available :-).

The problem is: if I want to have a heap memory like use by FreeRTOS, then by default this gets allocated into the first 8 KByte SRAM, unless I place it with a section attribute into a different area. Luckily, the CodeWarrior engineers have defined a user defined section name .m_data_20000000 in the linker file:

The important name to look at is the name before the AT: “.m_data_20000000”. This is the user section name to be used. That way, if I specify this section name as an attribute name, it ends up in the upper half of memory :-). So what I did is: I have added an optional attribute to the FreeRTOS component :-): 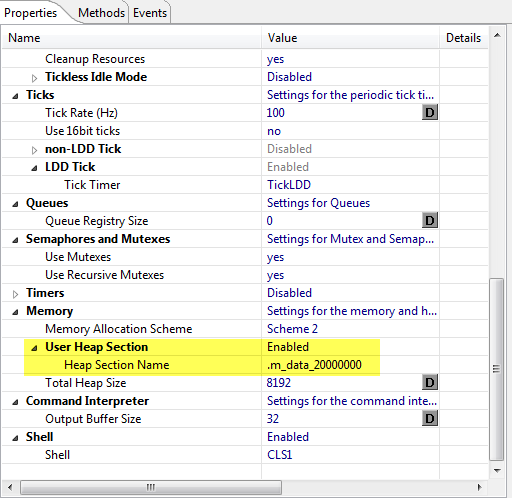 If enabled, this adds the specified section name to the heap variable definition:

Now I can use the upper memory area for the RTOS heap, while using the lower half of memory for my other variables :-).

The splitted memory architecture of the Kinetis K makes it difficult to use variables larger than half of the memory size. This is especially a problem with devices having not much SRAM. But at least now with the added FreeRTOS Processor Expert component attribute I can easily use the upper SRAM for my heap :-). But to the end, I hope that ARM Inc. could implement in the GNU linker the functionality to automatically distribute objects across multiple memory segments. Other linker for embedded targets already do this, as they had to deal with paged or segmented memory on different devices already. So if the GNU linker would be able to deal with this, that would be great! As always, the updated sources and components are available on GitHub. Happy Attributing 🙂