For some time I’m using the Nordic Semiconductor nRF24L01+ transceiver successfully in many projects (see “Tutorial: Ultra Low Cost 2.4 GHz Wireless Transceiver with the FRDM Board“). Since that tutorial things evolved a lot with the introduced RNet Stack. To honor the popularity of the Nordic Semiconductor nRF24L01+, Freescale has put a socket on the FRDM-K64F board. So time to make a new step-by-step tutorial how to use the nRF24L01+ with the FRDM-K64F. 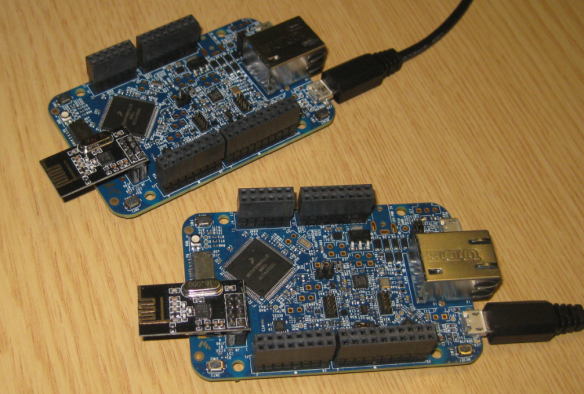 I apologize that it took so long until I have found the week-end and night hours to write this up: I had the transceivers and boards quickly working after I have received the boards back in April this year. But writing a tutorial takes much more time than what I needed to write the application itself. Probably I’m doing that kind of software+hardware too many times, so it does not sound like a big deal for me. But I have received several requests to help them combining the Freescale FRDM-K64F board with the Nordic Semiconductor nRF24L01+ transceiver, so here we go…..

You need a board (FRDM-K64F), a transceiver (nRF24L01+, you find many sources on the internet, I have mine from here: http://yourduino.com/sunshop2/index.php?l=product_detail&p=188), headers and basic soldering skills ;-). And you need this twice to communicate between two boards. 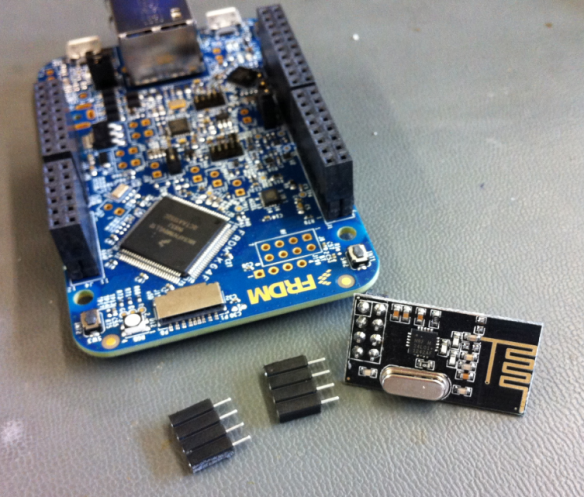 FRDM-K64F with nRF24L01+ Transceiver and Headers

Solder the header to the board: 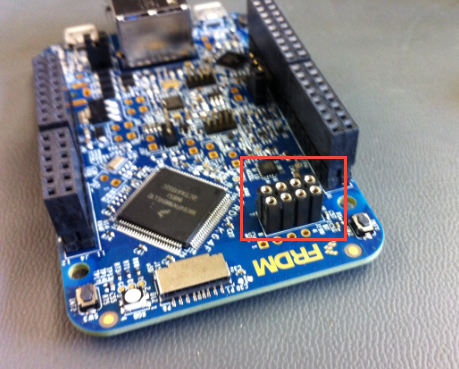 Then put the module on the header: 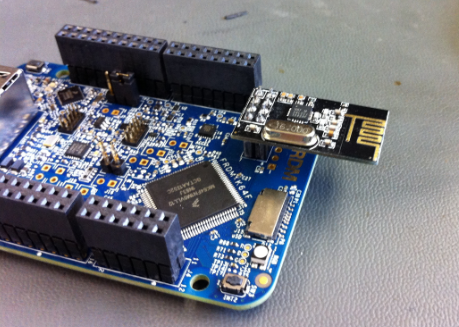 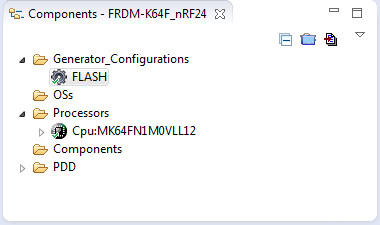 I’m going to use the RNet stack for my communication, and this stack uses the FreeRTOS queues for message buffering. While it would be possible to use any kind of buffers (ring buffer, etc), I keep using FreeRTOS in this tutorial, as it simplifies things a lot, and I can use it later for a more complex application.

So I’m adding the FreeRTOS Processor Expert component to the project. It will automatically add the Utility component too: 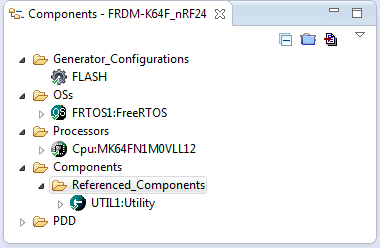 The RTOS gets configured to use the Cortex-M4F as this is the processor on the FRDM-K64F: 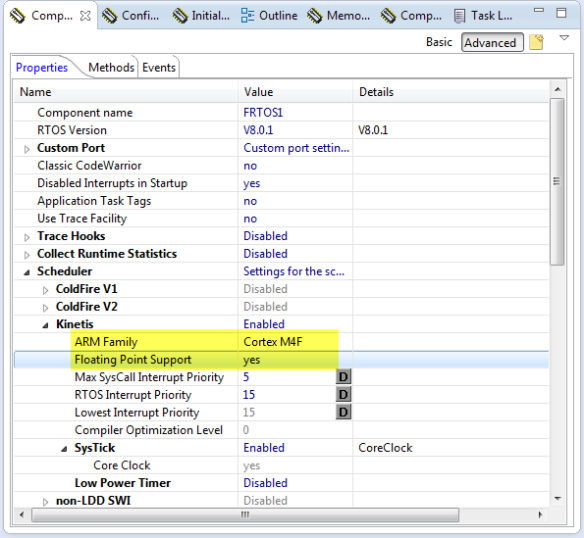 As we will need some Heap RAM for the transceiver buffers and stack, I increase the FreeRTOS heap size from the default 2K to something around 20k (I have plenty of RAM on the K64F): 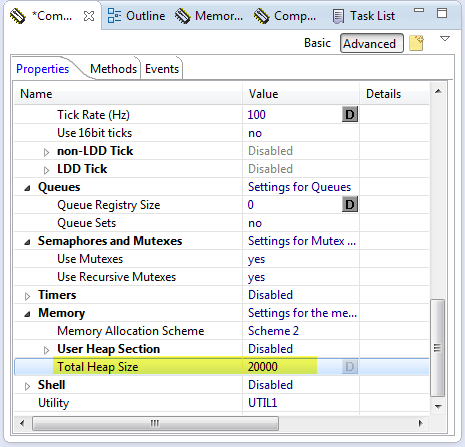 In the project settings, I need to verify that the settings are matching a Cortex-M4 with hardware floating point unit (fpv4-sp-d16): 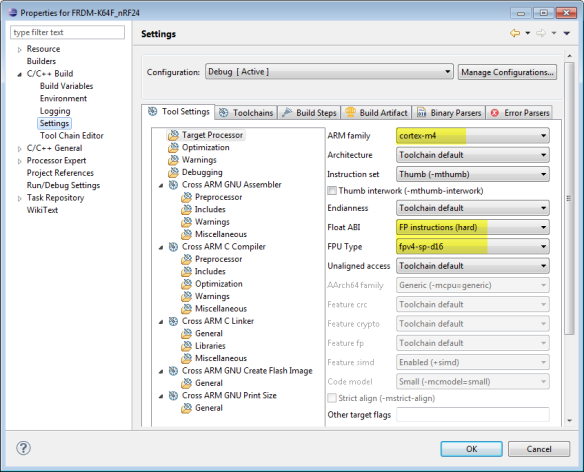 Next I’m configuring the CPU clocks. I just configure a rather high clock, so I will have a high clock for the SPI used by the nRF24L01+ transceiver. To reach an even higher CPU clock, see “FRDM-K64F at Maximum Speed of 120 MHz“. In this tutorial I’m using the 32 kHz RTC clock as reference. For this I enable the RTC clock in FEI mode: 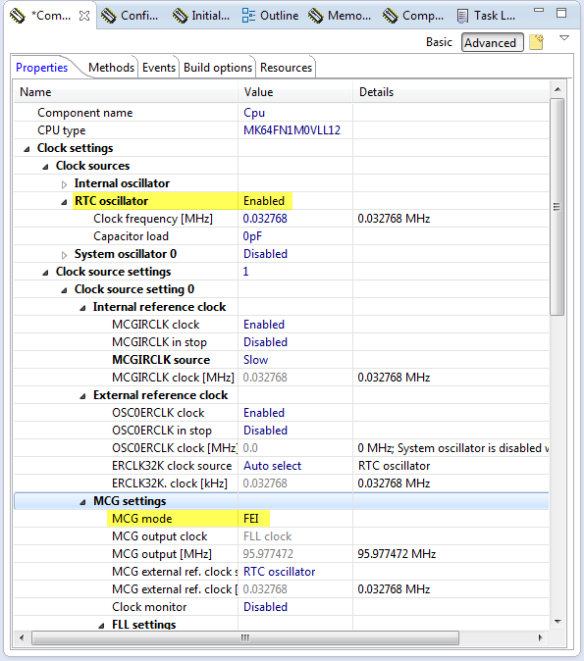 The FLL clock gets configured to 96 MHz (or close to this): 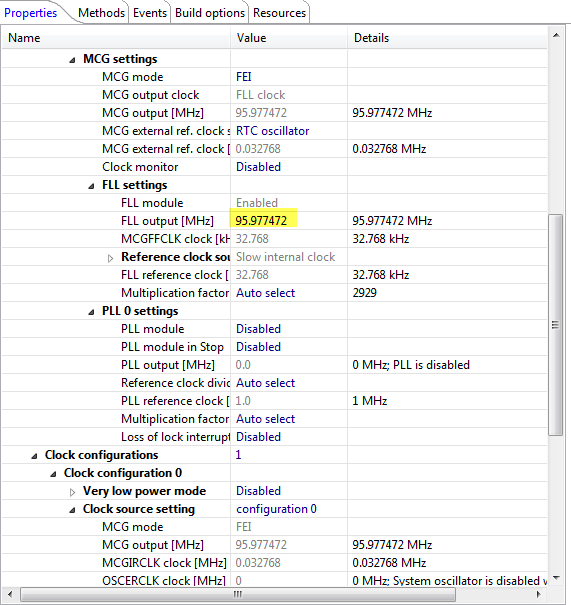 Based on that 96 MHz clock, I can configure the clocks for the core and peripherals: 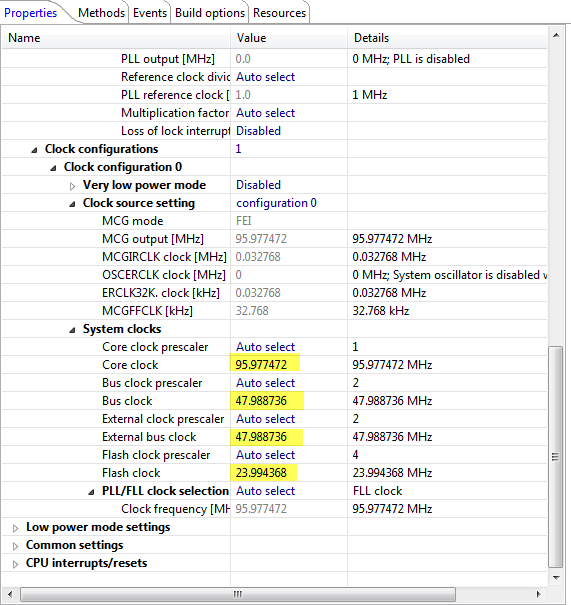 The nRF24L01+ uses an SPI interface to the microcontroller. I can use it two ways:

On the FRDM-K64F board, luckily the pins are connected to the hardware SPI, so I add the SynchroMaster (Hardware SPI) component to the project: 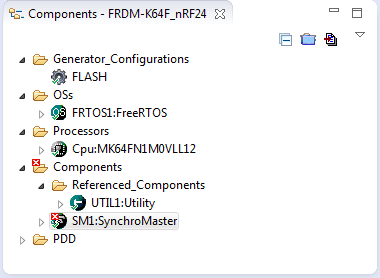 The component shows errors, as it is not configured yet. According to the FRDM-K64F schematics, I need to assign the following pins for the SPI1 channel: 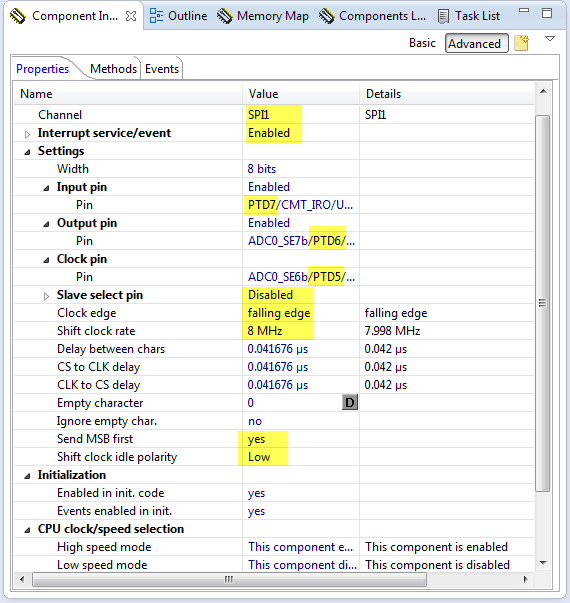 You *could* use the Software SPI too (you will need to select it in the RNet component, which comes next). In case you have no hardware SPI, then add the GenericSWSPI component to your project: 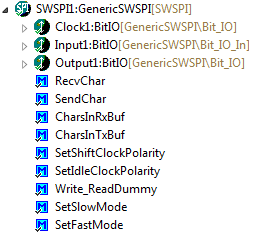 You need to configure the clock, input (MISO) and output (MOSI) pins to the pins on your board. The picture below shows the component settings: 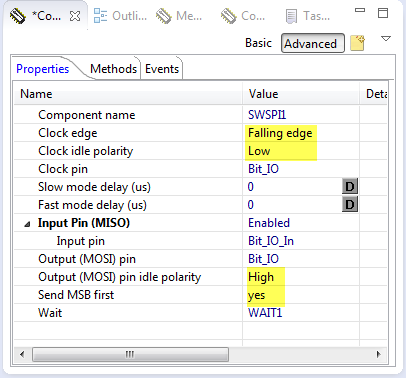 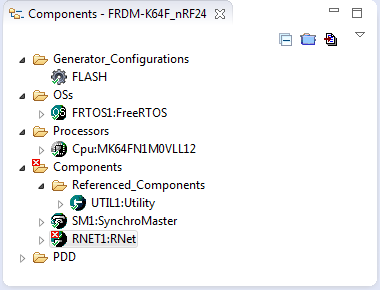 I configure the RNet component to use the nRF24L01+ transceiver and add a new component for it in the drop down box of the component: 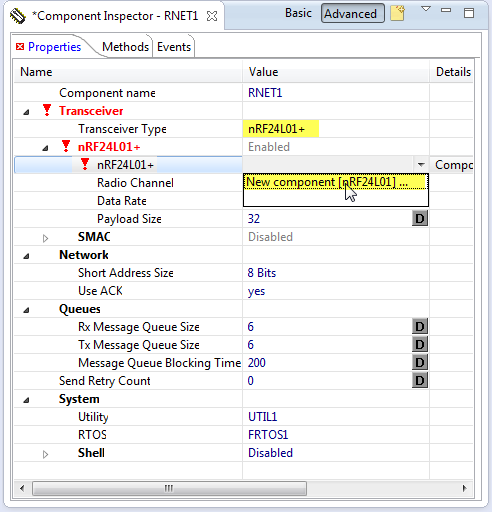 The RNet has other settings which we keep by default. Be free to change the settings once you have working version. You can configure the radio channel or the data rate. Both can be changed at runtime with methods provided by the component, so you can implement easily a channel hopping. The node network addresses are 8bit by default, so you can have up to 256 devices on a channel which should be enough for most cases. The address 0xFF (or 0xFFFF for 16bit addresses) are broadcast addresses.

The queues are used to buffer incoming or outgoing messages. For this FreeRTOS queues are used: Using more queues will consume more memory. Each element in the queue will hold a full message, which is in our case 32 bytes plus one overhead byte (so 33 bytes). The blocking time specifies how long the task shall wait if the queue is full.

Finally, a retry count can be specified. If greater than zero, it will retry to send the message if no acknowlege is received.

It asks me which SPI bus it shall us, and I can select the SPI component (SM1) I have configured in the previous step: 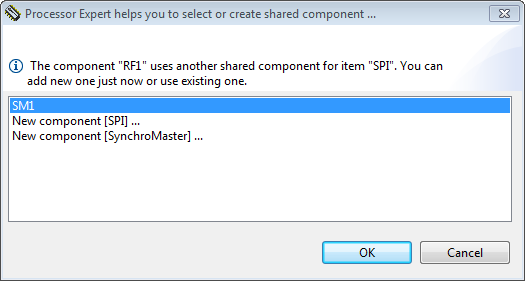 However, the RNet stack requests block send and receive methods on the SPI bus, and this is not provided by default. Looking at the description oft the method it tells me that I need to use buffers in the SPI component: 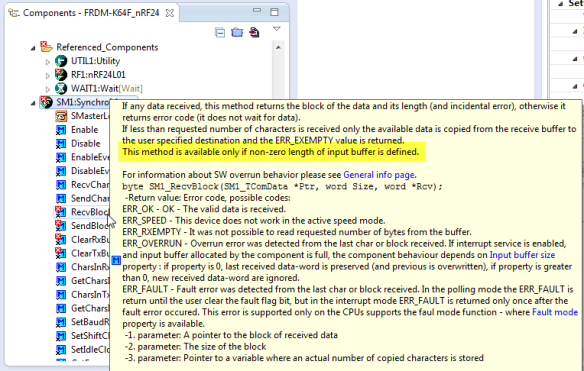 So I enable the buffers for SPI. The nRF24L01+ has a maximum payload of 32 bytes, so with the overhead I’m using 48 bytes each: 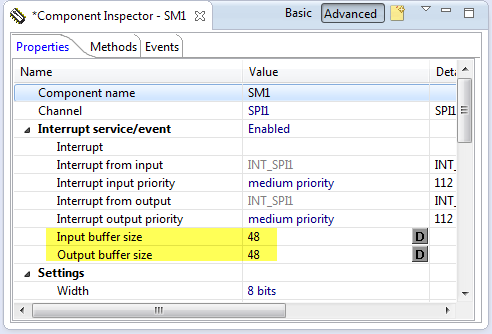 But I need to assign the CE and CSN pins of the nRF24L01 component: 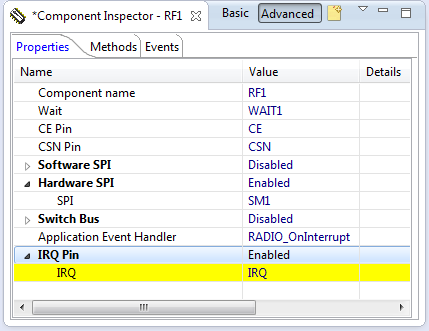 The IRQ pin is routed to PTC18, triggering on falling edge:

This completes the hardware part for the nRF24L01+.

Because I want to show the transceiver activity with LEDs’, I’m adding three LED components for the RGB LED of the board, configured to PTB22, PTE26 and PTB21: 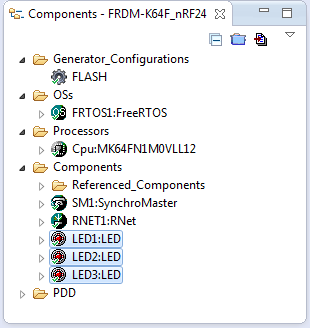 I’m going to add three source files to my project: 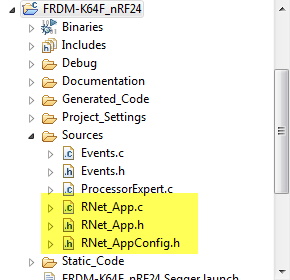 I discuss below the most important parts of each file. For the complete source files, see the project link at the end of the article.

In this header file I can configure the stack settings (I keep the defaults). And I should declare here the content of RAPP_MSG_Type as this will be my messages types. So for this tutorial I’m defining a PING message with numerical ID 0x55:

RNet_App.h is the interface to RNet_App.c. All what I need for now is just to call the Init() method which will initialize everything for me:

The functionality of the application and stack is in RNet_App.c.

The Init() method initializes the RNet Stack with RSTACK_Init(), assigns a message handler (RAPP_SetMessageHandlerTable(), more about this later) and creates an RTOS task. The RTOS scheduler itself will be started in main().

In this tutorial, the application runs in a single task: RNetTask(). I suggest to use one task just to deal with the radio transceiver, and add extra tasks for anything your application is doing otherwise. And make sure that the task is processing the state machine frequently enough. How much is ‘frequently engough’ depens on the amount of messages and buffer (queue) sizes. I recommend something of at least 20 Hz or more.

First, it assigns a node address for itself. I assign here the broadcast address as default. Then I initialize the counter variables and the state machine state (appState).

In the task loop I call Process(): this processes my state machine (more later). I’m using a counter to send every second a message, and I show this with a 20 ms blue LED blink.

The first argument is the pointer to the message data (&msgCntr), followed by the size of the buffer (sizeof(msgCntr)). RAPP_MSG_TYPE_PING is the type of the message. RNWK_ADDR_BROADCAST is the destination address (I send it to every node in the network). The last argument are special flags, but I do not need any here, so I use RPHY_PACKET_FLAGS_NONE.

The task processes a state machine, which has the following states:

From the initial state, it powers up the transceiver. Once the transceiver is powered, it its ready to send and receive data and processes the Radio messages. This is a very basic state machine: I use more complex ones for channel hopping, dynamically powering down the transceiver to save energy and so on. But for this tutorial I want to keep things simple.

If you read the nRF24L01+ data sheet carefully, you will notice that it needs 100 ms after power is applied until it is ready. I have seen some transceivers which needed even 120 or 130 ms, so I decided to wait 150 ms for all. Accessing the transceiver too early will create strange effects (it took me a while to realize that 😦 ). To wait the needed time, I use the following routine called from the above state machine:

As this is called in the context of the RTOS, I can use the current tick counter of the RTOS to find out if 150 ms have been passed. If not, I simply wait for the needed ticks, and then I call RADIO_PowerUp() which will access the transceiver and initialize it from power-up.

So far I can send messages, but how to receive a message? For this I’m using a message handler table which has a NULL pointer at the end, so I can add more handlers as needed before the NULL sentinel:

The RNet stack is informed about that table with the code we have seen earlier in RNETA_Init():

Whenever the low-level radio driver receives a message, it is passed up the RNet stack, until it reaches that message handler table. Then each handler can inspect the message and process it.

For our tutorial application, I have implemented the handler as below:

Each handler receives the message type, the message size, the message payload data and who has sent the message (srcAddr). So all the message parts have been unpacked by the lower stack layers. But if you want to use the full packet, then it is passed as a pointer too. Finally there is a handled parameter: here I tell the caller that I was able to handle the message.

In the handler I check for the type (RAPP_MSG_TYPE_PING), and then I’m free to do anything with that message or message data. Here I’m simply blinking the green LED for 20 ms to show that I have received the ping message. To access the message counter I have passed in the payload, I can use the *data pointer.

The last step is to call the initialization from main(): 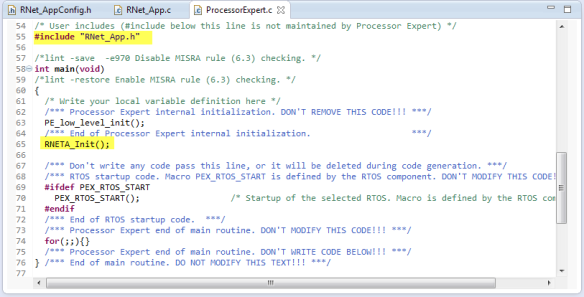 That should complete all the needed steps. Generate Code (if not already done), compile and build, and this should go without errors.

Running the application on the boards should get you some blinking LED’s:

With this tutorial I have added nRF24L01+ Transceiver support the Freedom FRDM-K64F board. The FRDM-K64F makes it really ease: solder a header, plugin the transceiver and add Processor Expert component to a project and I can communicate with another remote board. So I can build a network of sensor nodes very easily, and connect it to the internet, and so on. While this tutorial uses the FRDM-K64F board, you can easily do the same for any other board: all what you need is to connect the SPI pins and power the module. And of course add the software. Done :-).

This tutorial project is available on GitHub for Eclipse Kepler and the GNU ARM Eclipse.

73 thoughts on “Tutorial: Nordic Semiconductor nRF24L01+ with the Freescale FRDM-K64F Board”