Friday this week NXP has released a new version of their flagship IDE: the MCUXpresso IDE V10.3.0. The version number indicates an incremental update from the earlier V10.2.1,  but there are many exciting features and new features which make me switch my lecture material to this new IDE for the next semester.

The setup files for Mac, Linux and Windows are available from http://www.nxp.com/mcuxpresso/ide. The new IDE can be used side-by-side with the earlier versions, so no uninstallation is necessary and I can continue to use my projects with the earlier version(s). I recommend to use a dedicated workspace for each Eclipse, so you should not use a new/different Eclipse with an already existing workspace: open a new one as it is proposed by the IDE and then import existing projects as needed. The version I’m using in this article is the V10.3.0 build 2200. 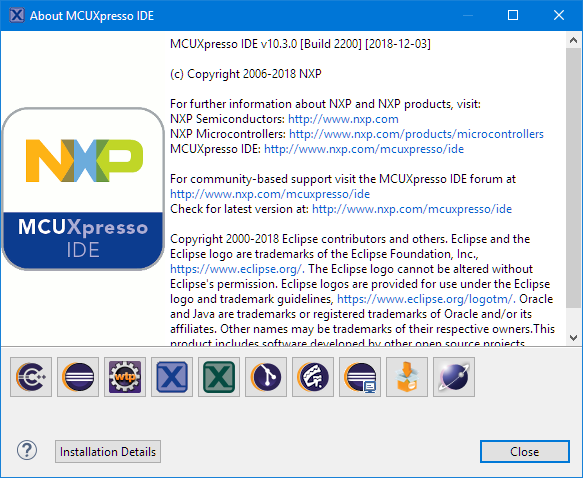 The IDE is Eclipse Oxygen based, free-of-charge and unlike other commercial IDEs there are no limitations. Documentation is available here: https://www.nxp.com/mcuxpresso/ide/documentation

I was able to load and use all my MCUXpresso IDE 10.x projects without any issues in 10.3.0.

I recommend to check out the release notes and documentation. In the next sections I explore things which are worthwhile in my view:

The GNU toolchain has been upgraded to GCC7 2018q2-update. That release comes with several bug fixes and support for ARM Cortex-M33. I have recompiled several of my existing projects, and the code size was the same plus/minus a few bytes, and all applications worked fine the same way.

If you have read my articles about ARM Faults then you know that debugging ARM Cortex Faults is not easy. The new ‘Faults’ view makes it now really easy to spot the location causing the fault. The view filters/shows all the fault bits with a description, the fault status registers, stacked register values with links I can jump to the place in my code:

Using the LinkServer (e.g. LPC-Link2) debug connection will halt the code inside the HardFault_Handler() as the probe automatically detects the fault handler running. For P&E and Segger it might be needed to pause the application, or what I’m doing is to have this in the hard fault handler to tell the debugger:

💡 Without a debugger attached the BKPT instruction will cause a hard fault. If this is not what you want, then use something like ‘for(;;){}’ instead.

The ‘Faults’ view decodes the Cortex fault registers and stack back-trace, and with this it is easier than ever to find the cause of a hard fault.

The ARM SWO (Single Wire Output) data is now available with the SEGGER and PEMICRO (P&E) debug probes (it was already supported with the LPC-Link2 debug probes).

For the SWO feature, see for example

SWO is an ARM Cortex specific debug protocol and requires a pin routed to the debug header: this is available on several NXP boards, but *not* supported by the OpenSDA circuit/firmware. So you need a SWO capable debug probe (SEGGER J-Link, a recent P&E Multilink (see this article) or a LPC-Link2 or LPC-Link2 embedded on the board). 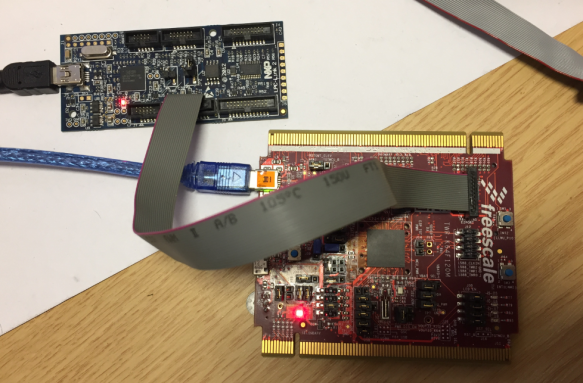 The release notes mention a LPC-Link2 performance improvements in the 10-20% range (debug, flash programming). I did not measure it by numbers, but indeed I noticed snappier operations with the LPC-Link2.

One functionality of SWO is the ability to print messages (‘printf style’) over SWO to the host. For the standard SDK projects the printf() functionality can be routed to ITM with an option during project creation: 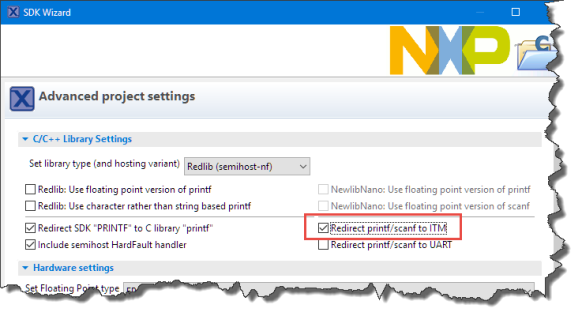 redirect printf and scanf to ITM

The other way which I prefer is to have a dedicated ITM putchar() function. I have uploaded an example project on GitHub for the TWR-K64F board:  https://github.com/ErichStyger/mcuoneclipse/tree/master/Examples/MCUXpresso/TWR-K64F/TWR-K64F_SWO

The SWO/ITM Console and other SWO features now work with the P&E and SEGGER debug probes, in addition to the LinkServer/LPC-Link2 which had this already supported in V10.2.

Using the P&E connection, I can display the SWO output in ‘SWO Printf’ view in which I have to ‘Start Trace’ first:

The other way is to use the MCUXpresso IDE SWO Trace Config view and to add an ITM console:

That way the messages are printed to the ITM console:

The same feature is supported for the J-Link connections too: 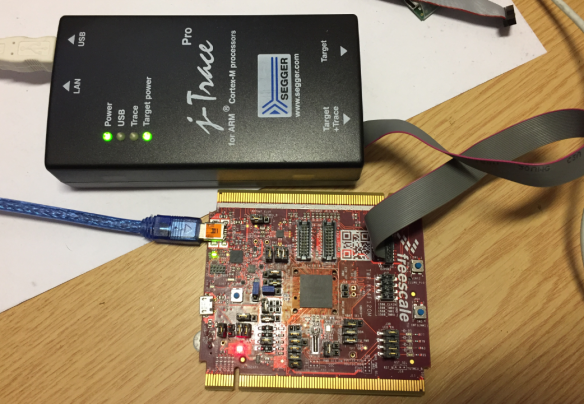 All the cool SWO features available for these other probes beside of the NXP LPCLink2 probably deserve a blob post on its own.

One feature I especially love in MCUXpresso IDE is its ability to debug FreeRTOS applications. I can switch between the FreeRTOS threads in the Debug view plus I have extra views available for tasks, timer, queues (includes semaphore and mutex) and heap. The V10.3.0 comes with the version 1.0.8 of the FreeRTOS TAD views which has been updated to support FreeRTOS V10.1.1. The FreeRTOS heap view supports now as well the ‘new-lib reentrant’ scheme 6:

With this it is possible to use the plugin with the standard newlib heap malloc()/free() in a reentrant way (see https://mcuoneclipse.com/2017/07/02/using-freertos-with-newlib-and-newlib-nano/).

The IDE adds support for the MCUXpresso SDK V2.5 which is now rolled out. I like the way that I can drag&drop SDK zip files in to the IDE. The V10.3.0 has re-organized the various SDK settings and I can change the drag&drop location to a user defined folder or use the workspace for it:

This is useful to separate the SDKs in case multiple IDE’s are used. The install location is shown in the Installed SDKs view too:

The MCU package/pinout settings are now accessible directly in the Project Explorer View. Previously I had to change it in the project settings (compiler defines).

Another nice extension is that now I can select multiple projects and then change the settings for all of them using the ‘Quick Settings’:

One thing which might not be clear for Eclipse newbies: Many actions in Eclipse need a ‘current project’, e.g. launching a debug session. Yet that ‘current project’ is not clearly visible in the Eclipse IDE. The MCUXpresso IDE has added an extension which combines ‘link to current source and project’ and highlights the currently active project, making that releationship clear: 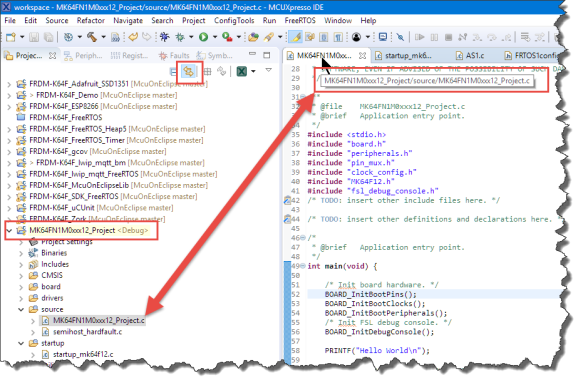 Additionally the currently active build configuration is shown in the project name:

The current project decorator can be turn on/off here: 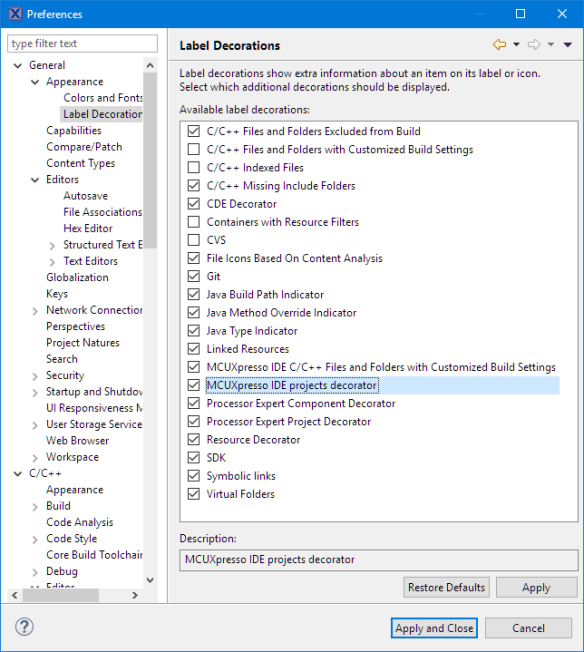 The memory configuration settings are greatly simplified: I can edit the settings without opening another dialog now: 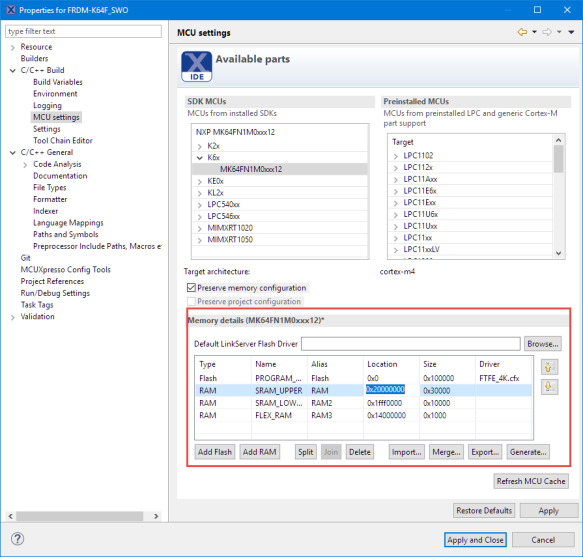 The ‘Registers’ view has been updated and now look the same for all supported probe connections. The registers are now categorized (GPR, FPU, Status, …) and include a description text. Additionally individual bits are decoded and shown in the view: 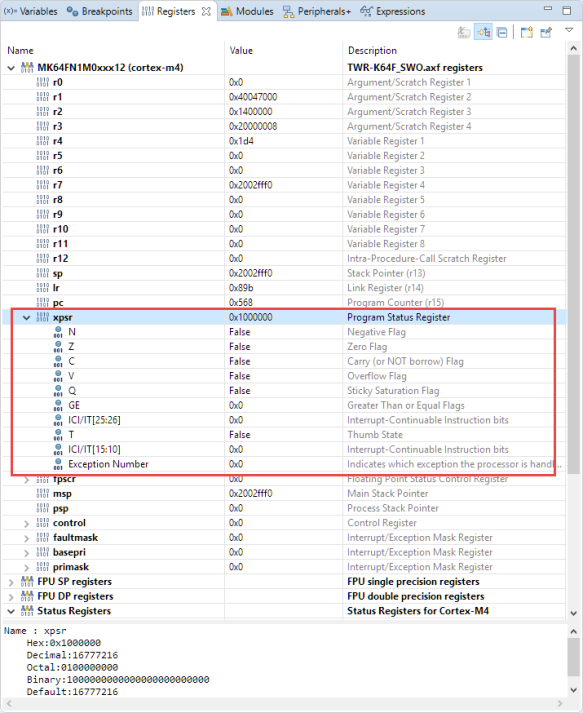 The IDE includes the V5 of the configuration tools. 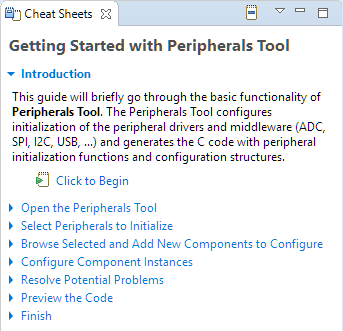 The new MCUXpresso V10.3.0 release comes with many new features and enhancements. The ‘Faults’ view helps with the nasty hard faults of the ARM Cortex, the updated core Registers view helps inspecting the application. The SEGGER and P&E debug probes provide useful SWO trace data in addition to the NXP LPC-Link2, plus many other larger and smaller goodies. These all will be very handy and useful for that new ‘Advanced Embedded System’ course I’m going to create next semester. I think the students will like it too :-). I have not touched on all items mentioned in the release notes and provided documentation, so be sure you have a read of it yourself too.