It is a common thing to boot a Linux system (see the Raspberry Pi) from a micro SD card. It is not that common for a microcontroller. The NXP i.MX RT ARM Cortex-M7 fills that gap between these two worlds. No surprise that it features a ROM bootloader which can boot from a micro SD card.

Booting from a SD card is kind of cool: load a new software to the card, insert it and boot from it. In some applications this can be very useful: in my configuration the processor starts the ROM bootloader, then loads the image from the SD card into RAM and then runs it. In that configuration no internal or external FLASH memory would be needed.

For this article I have used the following software and tools:

For an overview of the board have a read at “MCUXpresso IDE V10.1.0 with i.MX RT1052 Crossover Processor“. The latest IDE is described in “New NXP MCUXpresso IDE V10.3.0 Release“. I highly recommend using the EVKB (see comparison with the EVK: “i.MX RT1050 EVK vs. EVKB“).

To verify if loading works as expected, I prefer to create a ‘blinky’ project which blinks a LED: that’s simple and does not need much.

Because the bootloader on the i.MX RT will load the application into RAM space, I make sure that my project is linked to RAM. An easy way is to specify this during project creation/import:

The RAM setting is reflected in the project settings: 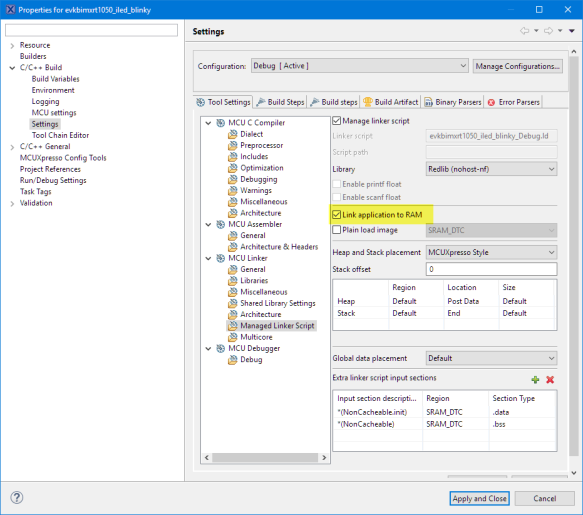 In the next step I need to change the memory map which is located here in the project settings:

💡 Note that this loads the application into ITC RAM which has a size of 64 KByte. So loading an application larger than this or exceeding the memory range will fail!

The bootloader needs some part of the lower end of ITC SRAM, so I have to free up 0x2000 in size.

💡 Note that the NXP documentation uses 0xa000 as the application vector and start address. I was not able to get it working with that address, what worked for me was this 0x2000 address.

I used the ‘Split’ button on the original SRAM_ITC, changed the Location to 0x2000 and reduced the size by 0x2000 too. Finally that lower 0x0-0x2000 RAM area I have moved to the bottom (just that I have it still listed). The most important thing is: move that SRAM_ITC with the 0x2000 start address to the beginning of the list: that way the linker script will place the vector table there. The goal is to have the vector table at that defined address. Below is a screenshot how it shall look like:

The next thing is to configure the MCUXpresso project to generate a S19 (S-Record) file, as this will be needed in a future step. See see https://mcuoneclipse.com/2017/03/29/mcuxpresso-ide-s-record-intel-hex-and-binary-files/

So add this to the project settings and post-build step:

Build the project, and the S19 file should be generated: 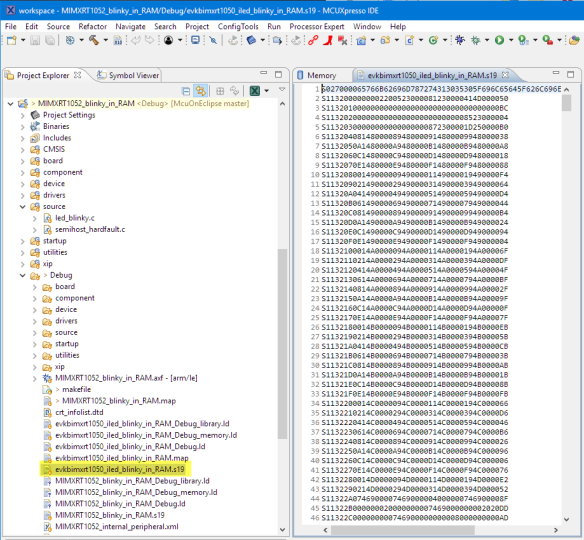 Now it is a good time to build and debug that project just to make sure it runs: use the MCUXpresso IDE and download the application. I’m using for this the XiP (External Flash eXecute in Place) boot setting:

Then check if everything works correctly:

Watch the LED blinking and you know you reached the ‘blinky’ point already. More to come…

To boot with the application from the SD card, I have to transform the .s19 into a special format. There are different bootable images, from unsecured, signed up to a secure boot image. To keep things simple, I go with a ‘unsecured’ one.

For this I need the ‘Flashloader’ utility which I have installed in the following directory:

Additionally my ‘blinky’ application is located in this folder:

The first thing to open following file in an editor:

and check that it has the following values/content of the .bd configuration file

💡 Note that the NXP default and documentation lists 0x8000 as the ‘startAddress’. I had to change it to 0x1000 to make it work!

Start a DOS shell and ‘cd’ into the following folder: 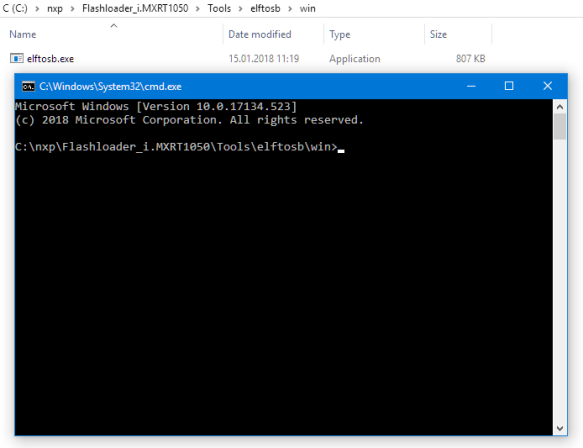 In the next step generate the boot image file boot_image.sb with:

copy boot_image.sb to the “OS Firmware” folder of the mfgtools: 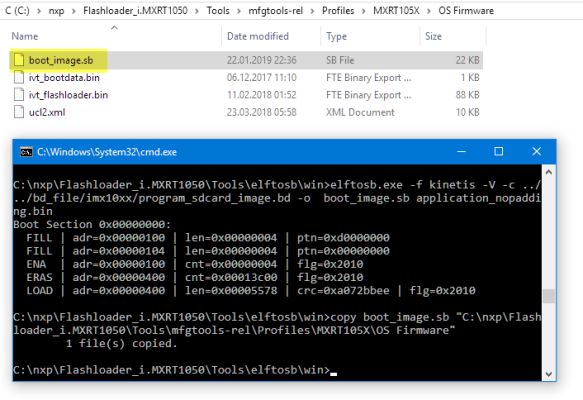 It should have this:

Set the SW07 switch to boot the board in Serial Download mode:

I’m powering the board with the USB cable on the OpenSDA USB connector. So for this I have to put the jumper near SW1 to the middle position:

Power the board first with the debug USB port (black cable below on the right), then plug in the USB cable for the Serial Downloader (white/blue cable on the bottom below): 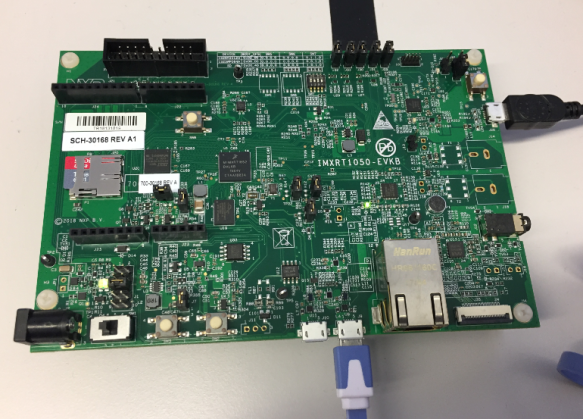 Next, launch the following tool

It should show like this if connected to the Serial Loader:

Press ‘Start’ Button and it should write the boot image to the SD card:

press Stop followed by Exit to close the tools.

Power off the board and change SW7 to boot from the SD card:

Enjoy now the loaded application from the SD card:

It is possible to boot the i.MX RT from the SD card. The data is stored in ‘raw blocks’ on the card and loaded by the ROM bootloader to the RAM and executed from there. It should be possible from here to program the flash, use a file system on the SD card and many more things. For now I’m happy that I have the base with a blinky blinky blinky LED 🙂