I’m very happy with my 50W Laser Cutter (see “Getting Control over a 50 Watt CO2 Laser Cutter from China“). My main decision factors were (and still are): Software, software, tools and again software, and down in the list finally the hardware. Same thing for that laser cutter. After several upgrades (see “50W Laser Cutter Upgrades“), it was time replace the stock controller hardware with a new one including LCD display:

The trigger point to buy a cheap chinese laser cutter was the K40 Whisperer software: that way I can use Inkscape with an easy-to-use program to get my design out of the laser cutting machine.  After several months, it is now time to get that laser cutter a major upgrade. Yes, it is again about software (Smothieware), but as well about hardware (Cohesion3D Mini Board with  the NXP LPC176): 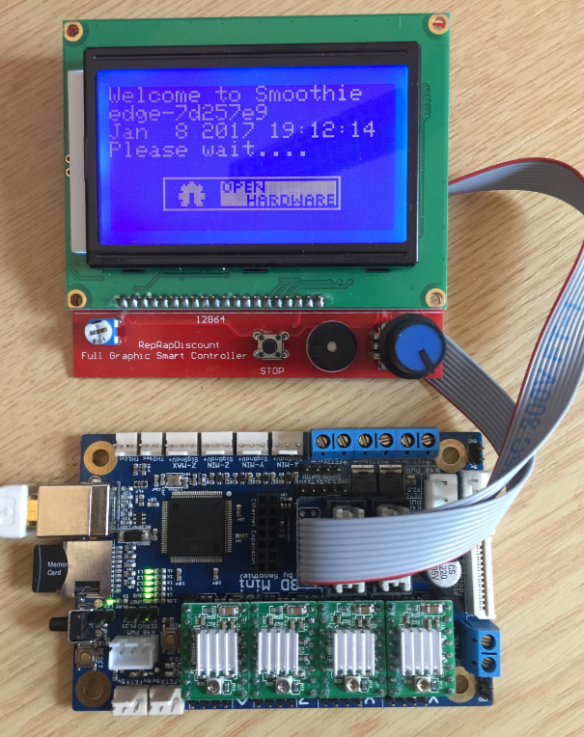 Cohesion3D Mini Board with LCD

Most cheap chinese laser cutters have the ‘M2 Nano’ board installed, same for my machine:

The above M2-Nano board picture shows on the bottom the two stepper motor cables plus the connection to the laser power supply (blue: LO (Laser Out), 5V, GND and 24V input. The white connector on the right is for the end stops (GND, YL, XL, GND and NC).

The board interfaces with a front panel which is used to set the laser power from 0% to 99.9%, plus a ‘Test’ button which fires the laser:

Below how it looks from inside the machine:

While that controller board would be ok, using it with the supplied (cracked?) CorelDraw software was a horrible experience. That’s why using the K40 Whisperer Software was such a good thing: easy to use and works much better.

The K40 Whisperer software is free of charge (thanks!) and evolving (see http://www.scorchworks.com/K40whisperer/k40whisperer_change_log.html), but when working on another side project I taped in the the world of CNC and 3D printing controllers. And there I really enjoyed the benefits of the Smoothieware: free, opensource and powerful G-code and CNC controller software, used for 3D printers, laser cutters and CNC milling.

That Smoothieware project really kicked me off to enhance my laser cutter with a more powerful solution.

While the above hardware and software is working fine, I was aiming for more:

The heart of the Smoothieware boards is the NXP ARM Cortex-M3 LPC1769. Running the Smoothieware software, almost any aspect of the controller can be configured with a configuration file on the micro SD card.

I have found that the company Cohesion3D sells a drop-in replacement board, the http://cohesion3d.com/cohesion3d-mini/. I ordered the board with 4 stepper motor drivers (2 extra to support future features like motorized bed leveling or rotation device) and the external graphical LCD board:

Cohesion3D Mini Board with LCD

With the stepper drivers and LCD the board costs around $150.

Using the guide from https://cohesion3d.freshdesk.com/support/solutions/articles/5000726542-k40-upgrade-with-cohesion3d-mini-instructions- the installation was easy.

Knowing the Smoothieware already pretty well, adopting the SD card config file was not difficult neither to match my machine which a bit different from the usual K40 laser cutter machine.

The only problem was with the end stops which took me a while to find: The K40 Endstop connector on the board only had one GND pin routed:

My machine did not connect the GND for the two end stops, so one pin was floating. I fixed this with an extra black wire connecting the GND on the end stops: 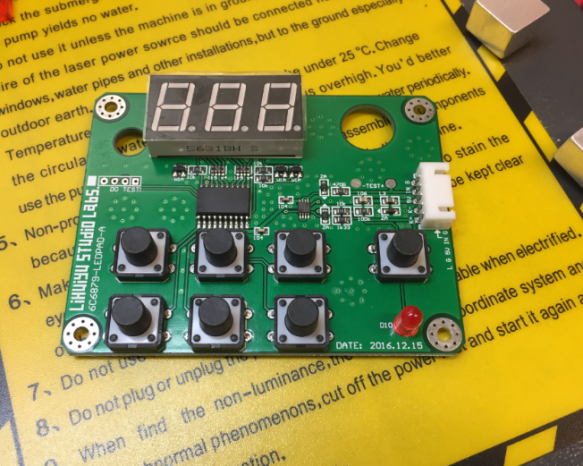 I created a new design in Inkscape and cut it out on 4 mm plywood:

Below the result (with the stop button 3D printed):

The Cohesion3D-Mini board runs the Smoothieware firmware which accepts G-Code. While looking for a good software, I have found LightBurn. The LightBurn software is still beta, but worked very well for me (there was only a homing issue which is now fixed in the latest version). It is possible to try it out for 30 days, with a very reasonable price point of $30 for the G-Code version which I use.

With Lightburn I can jog the laser head and assign different layers/colors with speed and power modes. 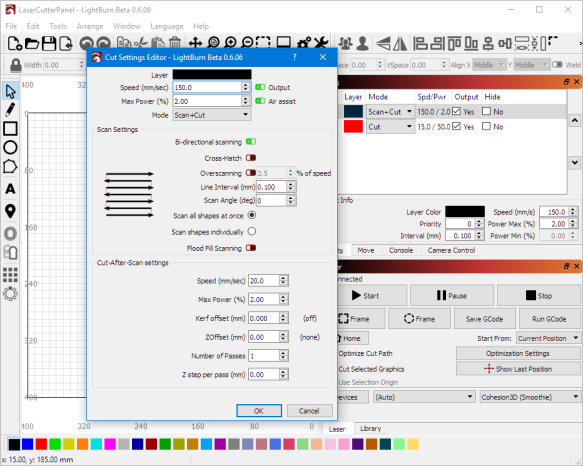 Scan and Cut Settings in LightBurn

Exactly what I was looking for :-), and it has camera and rotary device support too: 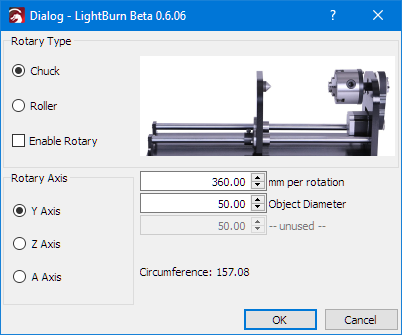 I was able to import my Inkscape laser cut designs into LightBurn. Lightburn includes editing functionality, but for now I prefer to use Inkscape for editing. Then I import the design into Lightburn to send it to the laser machine.

This has been a major update to the laser cutter: a new controller board with graphical display, plus new laser controller software running G-Code with the Smoothieware firmware on the Cohesion 3D Mini. The previous software and hardware was working, but now I have a very fine tuned and powerful controller for my laser cutting and engraving work. I can run jobs with variable speed and laser power. The Smoothiware configuration still needs some tweaking as I want to run the laser with even higher speed. Compared to the original board/software I can run jobs faster with properly moved laser head around corners, so this alone was worth the time to make that upgrade.