Freescale has released the new Kinetis SDK v1.2 back in May. Because of the changes in v1.2, previous applications (or my tutorials) do not work any more :-(. So time to write a new tutorial: how I can use Processor Expert with FreeRTOS for the Kinetis SDK v1.2.

Blinky Task with FreeRTOS and Kinetis SDK in KDS v3.0.0

💡 The SDK v1.2 API is very different from the v1.1 version. And indeed it turns out that porting an SDK v1.1 application to SDK v2.0 is very hard. As for myself, I gave up on that task 😦

As board I’m using the FRDM-K64F which has an ARM Cortex-M4F on it:

I create a new project in Kinetis Design Studio with the menu File > New > Kinetis Project:

Then I give a name for the project:

💡 For non-SDK Processor Expert projects, there is a bug in KDS v3.0.0 if I select the board. After project creation, it will complain that the CPU is not selected or set. The workaround is to select the device, not the board.

In the next dialog I specify to use the SDK v1.2 and Processor Expert. With the ‘Standalone’ option I make sure that the SDK files get copied into my project. This will make sure that I have them locally.

Then select the GNU C Compiler, and press Finish:

And the project is created:

With the SDK v1.2 there is now a fsl_os_abstraction component:

At the first sight, that component looks nice. But I don’t like it, as in bare metal mode it kind of tries to mimic an RTOS with the SysTick timer. I do not need that kind of thing: If I’m going bare metal, then I want bare metal without that timer, so what I always do first: disable that timer :-):

Timer set to none

💡 I wish I could get rid of that component completely as it is really not necessary for al my use cases. However, the SDK insists that it is there 😦

The added benefit of disabling that timer is that the code size gets reduced by 2922 bytes (!!!!!). Yet another reason to disable that timer :-).

The benefit of that fsl_os_abstraction component would be to add easily the desired RTOS:

It then adds its own SDK FreeRTOS component to it: 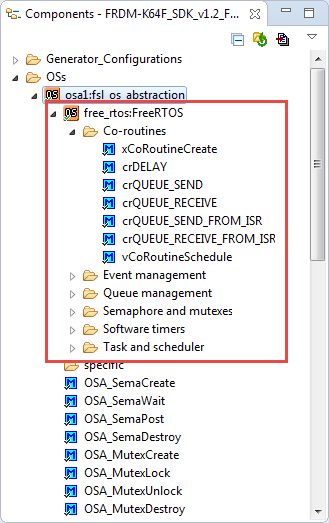 FreeRTOS as sub-component of fsl_os_abstraction

And in the properties I can configure the RTOS:

This component additionally adds a compiler preprocessor define “FSL_RTOS_FREE_RTOS” to tell the SDK sources which RTOS is used:

What I like in that component is that it uses folders for the functions (can I do this with the Bean Wizard for my component too?) and automatically  takes the clock speed from the SDK settings.

However, I have found several problems with that component:

To use the McuOnEclipse FreeRTOS port instead, have the OS set to ‘BareMetal’:

Add to the “FSL_RTOS_FREE_RTOS” compiler preprocessor defines so the SDK knows we are using FreeRTOS:

Then add the McuOnEclipse FreeRTOS component to the project. It will automatically add as well the Utility component: 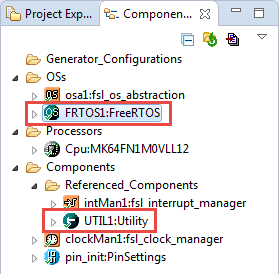 Verify the settings for the ARM Microcontroller you are using. As I’m using the K64F, I set it to M4F and have floating point enabled, as I want to use hardware floating point in my application:

As this component can work with and without the Kinetis SDK, and in this tutorial I’m using the Kinetis SDK, enable that in the setting. Additionally have the special Kinetis SDK component added: that component ensures that all necessary typedef’s are available. As the SDK v1.2 now comes with the OSA functions generated, have that setting set to ‘no’:

With this, ready to generate Processor Expert code, and then do a build:

This should build without warnings or errors.

I already can run that program, and it will only run one task: the FreeRTOS Idle task. To make things a bit flashy, let’s add a Blinky task. Creating a FreeRTOS task is as easy as this:

It creates a task (function BlinkyTask) with a name (“Blinky”), having the minimal stack size as configured in the component settings (which is 200, or 200x32bits = 800 bytes). It does not pass an initial task startup value (NULL), sets the task initial priority to taskIDLE_PRIORITY (which is 0, and the same priority as for the IDLE task. As I do not need a task handle created, I pass NULL as last parameter.

I have this code added to main() in main.c:

Next is to implement the task itself in an endless loop (never leave the task!):

I can add that to main.c too: 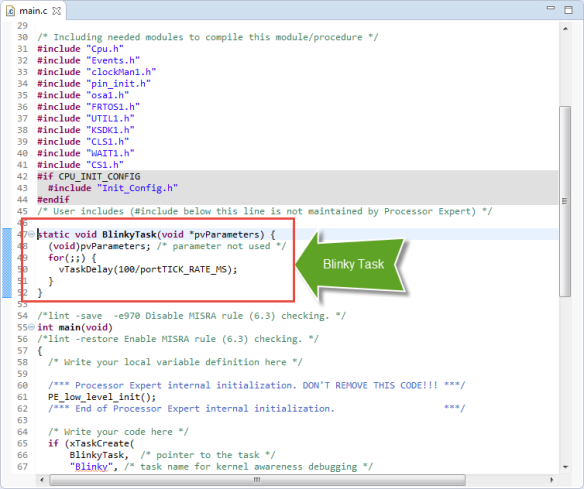 Blinky Task, not blinking yet

That ‘Blinky’ task is not blinking yet. What I need to add is the code to blink the LED on the board. On the FRDM-K64F the Red RGB LED is on pin PTB22.

I add the fsl_gpio from the SDK v1.2.0 repository to the project:

As I’m only using output pins, I disable the Input pins and assing PTB22 (LEDRGB_RED) as my output pin. As the LED is low active (cathode pin on the microcontroller pin), I use ‘1’ as initial Output Logic. 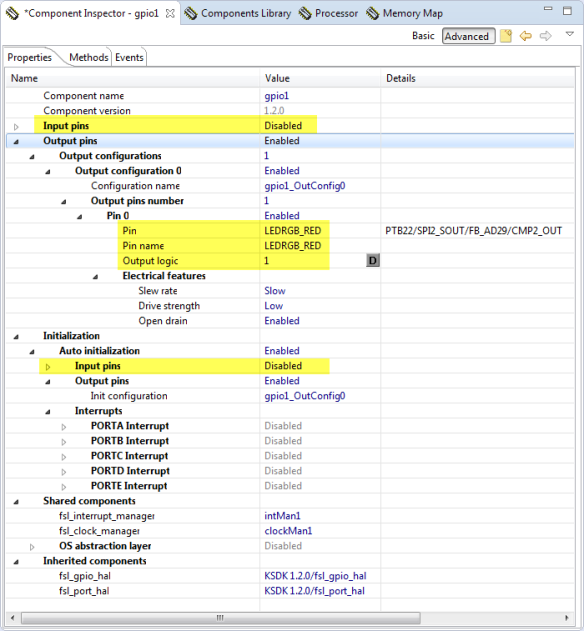 Because I have added/changed components, I should generate Processor Expert code again.

To toggle the LED in my code, I can use the assigned ‘Pin Name’ (LEDRGB_RED):

A cool trick is to drag&drop the function name into the source: 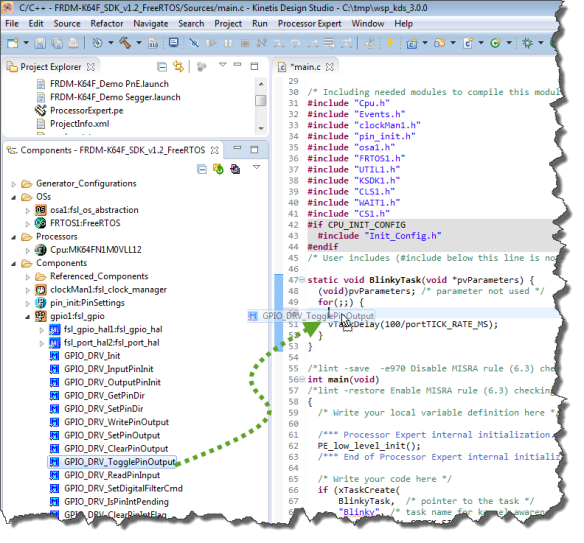 With this, my tasks is extended with the LED toggling functionality:

Blinky on Freescale Kinetis FRDM-K64F Board

Depending on what functionality you are using in the SDK, you might need to turn on FreeRTOS Software timers. This is the case if you add the fsl_i2c SDK driver in your application. This one depends on having software timers enabled in FreeRTOS, because it is using xEventGroupSetBitsFromISR().

The values depend on your needs:

I recommend that you enable Timers in FreeRTOS only if you need it, because this will add one extra task to the system.

The project created in this tutorial is available on GitHub.