By default, the GNU compiler (gcc) optimizes each compilation unit (source file) separately. This is effective, but misses the opportunity to optimize across compilation units. Here is where the Link Time Optimization (LTO,  option -flto) can help out: with a global view it can optimize one step further.

The other positive side effect is that the linker can flag possible issues like the one below which are not visible to the compiler alone:

Link Time Optimizer can be turned on in the optimization settings of the GNU MCU Eclipse plugins (e.g. in Kinetis Design Studio):

The same setting can be found inside the MCUXpresso IDE (shown for the version 10.2 below):

Type does not match original declaration

What LTO has found in this case is an issue the compiler was not able to see:

The warning is for the object named ‘__SP_INIT’ which is flagged for used with different prototypes. Searching the project for the usage of that object shows that LTO is correct with its analysis:

In startup.c the (linker generated) symbol __SP_INIT is declared as

while it is used in Vectors.c with:

That problem would not exist if that external declaration would be in a header file, but this is how the engineers have set up the startup and vector table files :-(.

In Vectors.c __SP_INIT is used to initialize the stack pointer (SP) in the vector table as:

__SP_INIT is defined in the linker script:

So the linker creates a virtual object and assigns it to the address 0x2000’0000.

It is used in the startup code as below:

So for the vector table it is just a 32bit value (memory address), while in the startup code it is an array of char, and assigning the array name with a cast will take the address of that object and assign it to the local variable ‘addr’.

While this ‘magically’ works, it is not correct, especially using an object as above with different declarations. At least it is not a clean way to use that symbol.

How to solve this? One challenge in this case is that the ‘Vectors.c’ file is generated by Processor Expert, so I cannot easily change that one. But I can fix the variable and usage in startup.c which is normal application code. The fix is to match the declaration present in vectors.c:

As a reminder: if using -flto with FreeRTOS and you want to debug it, make sure you turn on the LTO helpers in the FreeRTOS configuration: 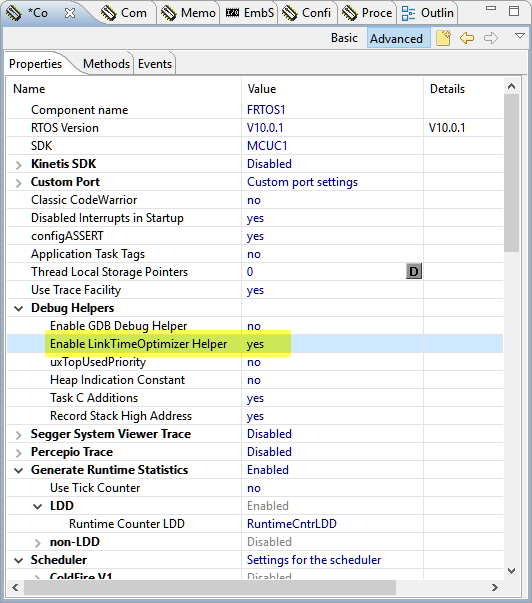 The above setting tweaks the FreeRTOS source base and makes sure that symbols needed for Kernel Awareness or symbols used in some assembly routines are not removed or tweaked by LTO.

Link Time Optimization is a cool optimization. The optimization still has room for improvements, but I have found that with turning it on, it is able to flag hidden issues in the code. So -flto is as well an extra check for my code.