Eclipse for C/C++ (CDT) offers two different ways to get out of a debug session: Terminate and Disconnect:

The terminate and disconnect behaviour is not standardized, and varies between Eclipse distributions and debug connection. This article is about how things are handled in MCUXpresso IDE, and how I can influence the behaviour.

This article is part of a series to get up to speed using the new NXP MCUXpresso IDE. Published so far are:

With debugging with Eclipse, there are two different ways to end a debug session:

As said in the introduction text, the behaviour depends on the Eclipse distribution and run control. I know that especially ‘disconnect’ varies a lot, to the point that plugin owners even disable the ‘disconnect’ button. So here is how things are working in MCUXpresso IDE:

The following table summarizes the behaviour:

With the exception of disconnect while suspended, the P&E connection behaves as expected. The Segger GDB connection throws an error for disconnect, and the terminate action seems to exposes some race conditions. The LinkServer has the terminate button disabled.

Below some tips how to configure the behaviour.

The P&E connection offers both the ‘terminate’ and ‘disconnect’ buttons, so it is close to perfect. But there are no settings I’m aware of to configure the behaviour in the launch configuration.

The LinkServer (LPC-Link2/LPC-Link/CMSIS-DAP) connection offers the terminate button and the disconnect button is grayed out/disabled.

The Linkserver terminate action can be configured in the Debugger configuration settings under the ‘Debugger’ tab. The setting can be easily missed as the ‘terminate’ action is behind the ‘disconnect’ setting: 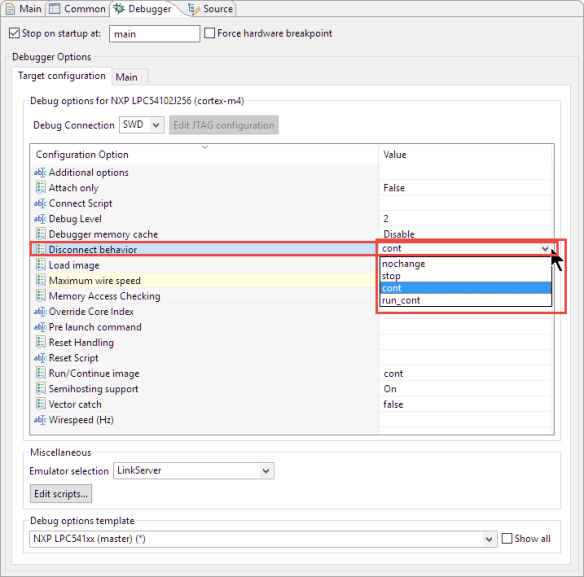 It has the following options:

While this is a very flexible way to configure the ‘terminate’ action, it would be easier to use if the ‘disconnect’ button would be available. Otherwise I always have to go into the launch configuration and change the settings.

There is a feature request on this (https://sourceforge.net/p/gnuarmeclipse/feature-requests/106/), and the workaround is to

The ‘terminate’ always does a ‘restart’.

There is an option to change this so the targets does not restart. From the Segger J-Link manual:

Add the following to the ‘Startup’ tab in the ‘Run/Restart’ Commands:

What it does for me is to reset the target but keep it halted.

The Segger J-Link plugin which comes with MCUXpresso has the disconnect button available, but is currently not supported:

Terminate and Disconnect can mean different things for different Eclipse implementations. The P&E implementation is mostly following what I expect, and the NXP LinkServer implementation has configuration setting for the terminate action. If using the Segger J-Link in MCUXpresso IDE, with using the GNU ARM Eclipse plugin I have a command line option to control the J-Link behaviour.

8 thoughts on “MCUXpresso IDE: Terminate and Disconnect a Debug Session”