To me, one of the most frustrating things working with ARM Cortex-M cores are the hard fault exceptions. I have lost several hours this week debugging and tracking an instance of a hard fault on an ARM Cortex-M0+ device. 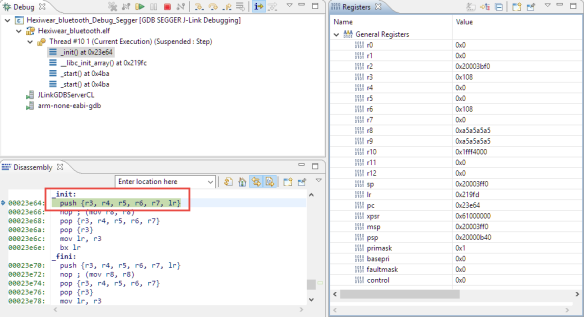 Next assembly step will cause a hard fault

Background is that I’m porting a project (NXP Kinetis KW40Z160) to Eclipse and the GNU tool chain for ARM. The application seems to run fine after downloading it with the debugger.

However, it crashes with a hard fault if either I do a ‘restart’ with the debugger or if I do reset the microcontroller with a SYSRESETREQ (see “How to Reset an ARM Cortex-M with Software“).

Interestingly, it crashed during startup in the ANSI library, in the _init() function:

Next assembly step will cause a hard fault

Pushing the registers in _init() will cause the hard fault exception: 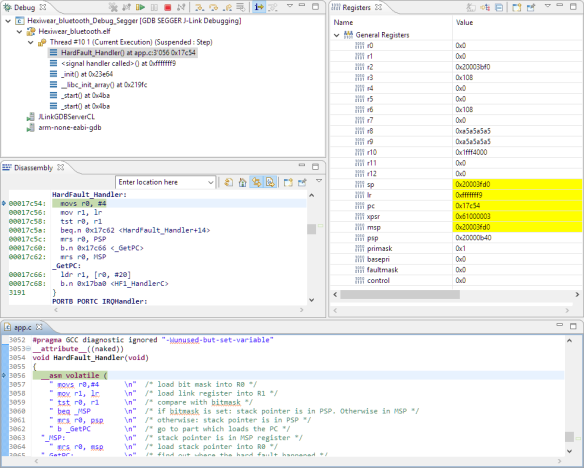 Interestingly, that same code with the same registers/stack/etc works fine the first time. But does not later after the application is running.

The first (usual) suspect was to check the usual suspects:

Well, that’s now the point I run out of ideas :-(. What remains is the desperate attempt to ask colleagues which returned a similar list of points as above. So no progress.

Next: search the internet. Lots of other people have issues with hard faults too. At least this was revealing an interesting article about imprecise hard faults. Very interesting reading and I did my digging. Unfortunately it only applies to Cortex-M3/M4 and to to the M0+. Anyway I have added an option to the hardfault handler so I can deal with this better in other projects: 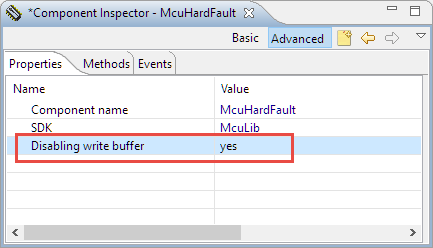 And indeed, after hours of searching I narrowed it down to the flash programming: The application is storing data internally by reprogramming a 1 KByte flash page, and for this it erases a 1K block in flash. In the linker file it was allocated like this:

Erasing seemed to work fine. But after that block erase the microcontroller would crash after a restart.

Looking closer at the linker file, I finally spotted the problem: it should have been aligned to the 1k Flash block size:

With this change, the problem went away 🙂

Dealing with hard faults on ARM is not easy. This particular one was caused by erasing a FLASH memory block which was not aligned. It seems to me that somehow the internals of the processor got screwed up by this. The challenge was that it then crashed in a way not tight to the cause of the problem. This kind of problems are not easy to find and solve. What usually works best and worked in this case is trying to reduce the problem: have a ‘working’ code, and have a ‘failing’ version. Try eliminate all variables (board, debugger, power supply, host machine) and then reduce the problem to narrow down the problem as much as possible.  In any case, I hope this post can help others in such a case. And yes, some luck helps accelerating that process ;-).