When using the FreeRTOS Task List in the Eclipse based MCUXpresso IDE, it shows the list of tasks with their stack size used. But with the default FreeRTOS settings it is not able to determine the correct stack size and shows a warning icon:

The warning should tell me that the information shown about the stack size is wrong: I did create the App Task with 110 stack units (each 4 bytes) so it should show 440 bytes, but it shows only 308 bytes.

Why is that? The reason is that the debugger (or FreeRTOS Kernel Awareness in Eclipse) does not know the total size of the memory allocated for the task.

On ARM Cortex the stack is growing from the higher to the lower addresses, as shown in the image below:

The ‘Stack High Water Mark’ is something very useful: FreeRTOS fills the stack space at task creation time with a 0x5a byte pattern. The debugger or the RTOS can find out that way the ‘high water mark’ for each task.

The solution is to add the following macro to the FreeRTOSConfig.h file:

With this turned on, FreeRTOS stores an extra pointer pxEndOfStack in each Task TCB:

Below such a TCB in the Global Variables View in Eclipse (MCUXpresso IDE): 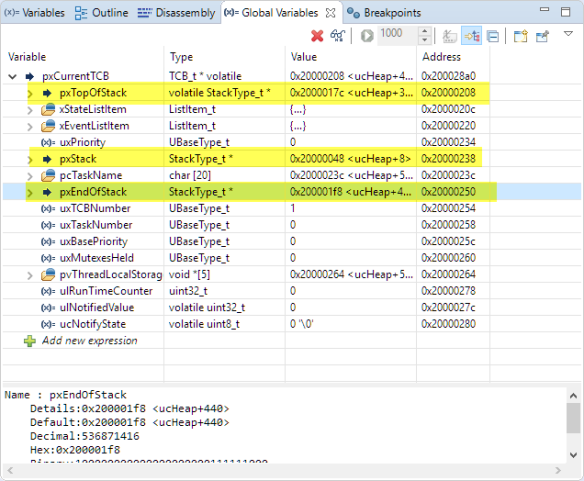 With this, the debugger or FreeRTOS Task Awareness knows the real size of the stack and can show the correct information:

Actually it is still showing 432 Bytes and 440, because it does not count the first and last entry on the stack.

The image below should help you understand the information provided:

Of course there is a reason for FreeRTOS not to store that pxEndOfStack by default: it is not needed by the Kernel. So enabling configRECORD_STACK_HIGH_ADDRESS will need 4 more bytes of RAM for each task plus a few code bytes to set that value. But for debugging purposes and this is very well spent.