Many of the NXP OpenSDA boot loaders are vulnerable to Windows 8.x or Windows 10: write accesses of Windows can confuse the factory bootloader and make the debug firmware and bootloader useless. In this post I show how to recover the bootloader using MCUXpresso IDE and the P&E Universal Multilink.

In this post I show how to re-program the OpenSDA V2.x bootloader with the MCUXpresso IDE V10.0.2, using the P&E Universal Multilink. A JTAG/SWD probe has to be used, it is not possible to reflash and fix the OpenSDA bootloader on the Kinetis K20 without it.

As board I’m using the NXP FRDM-K22F board.

💡 Older OpenSDA v1.x (e.g. FRDM-KL25Z) cannot be updated as the bootloader on these boards use a closed bootloader which cannot be re-programmed.

The matching bootloader and firmware for your board can be found on http://www.nxp.com/opensda.

The FRDM-K64F board was the first one with an open bootloader (OpenSDA V2.0), and the debug firmware application starts at address 0x5000.

Later boards (as FRDM-K22F) are using OpenSDA V2.1 where the application starts at address 0x8000.

Both original bootloader expose the Windows 8.x/10 problem. What fixed for me the Windows 8/10 problem was using the OpenSDA 2.2 Daplink BOOTLOADER for K20DX.bin (Application Base address at 0x8000) on GitHub.

Because the P&E debugger loader cannot (yet?) load bin (binary) files, we have to convert the file into an S19/S-Record which is supported. There are multiple ways to do this, one is using the GNU binary utilities, see https://mcuoneclipse.com/2014/08/03/converting-s19-files-into-binary-files-with-gnu-objcopy/.

Below is an example command line (update for your file names):

💡 I have uploaded the resulting .s19 file to GitHub: https://github.com/ErichStyger/mcuoneclipse/tree/master/OpenSDA/OpenSDA%20V2.2

To flash the bootloader, the easiest way is to create a dummy project (which CPU does not really matter) with the MCUXpresso IDE.

💡 The logical CPU choice for that project would be a 50 MHz K20DX128M5, but because NXP has not produced an SDK with all the files for it, we cannot use it. Instead create a project e.g. for any CPU for which you have an SDK, e.g. the FRDM-K22F itself. We will have to change the MCU in the debug configuration.

Connect the P&E Multilink Universal to the Debug connector of the K20 (OpenSDA). Check your board schematics and make sure the cable is properly oriented. Typically it is the SWD header close by the K20 MCU.

Then use the context menu on the project to create a new P&E debug connection:

Double-click on the created debug launch configuration to open it. Use the ‘Select Device’ button in the Debug tab of the P&E Debug connection to set the device to the K20DX128M5 which is used on the board for the OpenSDA circuit:

In the debug configuration, instead using the normal .axf, specify the .s19 file. In the example below, I have added that .s19 file to the root folder of the project. 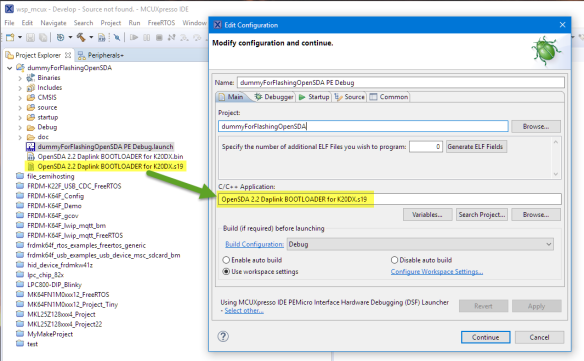 💡 I cannot use the ‘Search Project…’ or ‘Browse…’ buttons. Enter the file name directly. Make sure it matches the correct file and path.

Save and close that dialog.

To download the file to the K20DX128M5, use the ‘Debug as’ context menu on the launch configuration we have modified:

That should download the S19 to the board. The debug session does not show anything useful (because we are debugging with a binary S19 file with no source or debug information), so we can end the debug session. 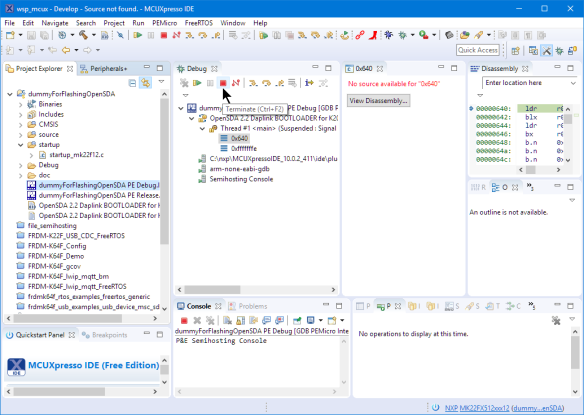 Power-on the board with the reset button pressed. The device should enumerate as DAPLINKBOOT device, and the DETAILS.TXT on it should show this:

With the bootloader restored on the board, you can now load the debug firmware (e.g. from SEGGER or P&E, available from http://www.nxp.com/opensda.

It is easy to update the NXP OpenSDA V2.x bootloader with a DAPLink one. This fixes the Windows 8.x/10 problem which can make the bootloader and debug application useless. All what I need is the binary/s19 file plus a JTAG/SWD debug probe. As the P&E debug connection knows .elf/.axf and S19 files, I have to convert the binary (.bin) into an S19 file first, then specify it in the debug connection, using the K20DX128M5 as a device. With this, I can recover the OpenSDA bootloader.

💡 The above approach to use a dummy project and then point to the S-Record/S19 file of course can be used for a ‘normal’ project binary too.