Questions from students or readers of my articles are a great source for all kind of articles. And here is the ‘question of this week’: “What is realtime debugging”?

Debugging is probably the part in the development where the most time is spent, for many reasons. It is that part of the development process which usually can be planned the least. If you are looking for an overview about different debugging techniques, or if you are wondering what ‘Realtime Debugging’ means, then I hope this article is useful for you.

I’m still amazed how many students are not familiar with the concept and benefits of ‘debugging’. Debugging is defined by Wikipedia as:

“Debugging is the process of finding and resolving of defects that prevent correct operation of computer software or a system.”

And indeed it can be something like finding and removing a moth from a relay :-):

If the system is correct and operates correctly, then no debugging is needed. But how many systems are known as correct in all cases? At least the software written by me is rarely correct the first time, so I’m using a ‘debugger’ to inspect the system to find ‘ bugs’ in order to correct the system.

There are many ways to ‘debug’ and inspect the system:

All the above debugging techniques have an impact on the device under debug, which is commonly referred as ‘intrusiveness’. Debugging might be more or less intrusive or disruptive for the device under test. For example using stop-mode-debugging means bringing the system to a full stop which might affect other systems around the system under debug (think about halting the engine in a car while driving). Or using printf() style debugging will affect the resource usage and timing of the system, because the device-under-test needs time to put out all the needed data. Because debugging might impact the timing of the system, we have a closer look to the ‘time’ aspect.

The term ‘realtime’ is used in many ways (see Wikipedia). ‘Realtime’ is an attribute of a system. In the context of embedded systems or computer systems, a ‘realtime system’ can be defined as

Point 1 and point 2 are the most important ones. Point 3 and point 4 are a logical consequence of the first two points. The definition is more around system theory, but for our question of ‘realtime debugging’ the debugger or the device under test (with the debugger attached to it) is ‘the system’.

Condition 2 (At the correct time) means that the correct result (from point 1) needs to be delivered at the specified time or within the specified time frame. ‘Realtime’ does not mean ‘as fast as possible’: it means: ‘at the correct time’, which includes ‘within the correct timing boundaries’, either relative or absolute.
There are two ‘flavours’ of realtime: hard realtime and soft realtime. For hard realtime the system has to meet the condition 2 in 100% of the time, otherwise the system is not considered as correct. For example a hard realtime airbag system has to deploy the airbag in 100% of all cases, it is *not* ok that the airbag sometimes is deployed a too early, too late or not deployed at all (you certainly would not use such a system, right?). In a soft realtime system it is fine that the system sometimes violates the ‘correct time’ condition, such as a video streaming system could delay some frames or miss sending a few of them. The system is still considered as ‘correct’ (you still would use the system to watch a video), but the system would be considered as ‘degraded’ or as ‘not so good’. For the sand clock project shown above, the time needs to be written every minute. It is a soft realtime system as it would be ok (but not good) if the time would be written several seconds too late.

Condition 3 (Independent of current system load) is a logical result of the previous two points for computer systems. A computer or microcontroller can only do one single thing at a time. However, the computer system is attached to the ‘real world’ in which we are living, and in this real world things are happening in parallel. For a computer system, dealing with that ‘real’ world means that the computer system has to divide its processing time to multiple things (‘multi-tasking’). This condition basically means that the regardless how many things the computer system is doing, it needs to meet the timing and correctness conditions. Condition 3 is used as a ‘helper’ condition to qualify and quantify the scenarios under which the correct result has to be delivered at the correct time. For the example of the sand clock: it is runs an operating system on a tinyK20, and it can communicate over USB to the outside world, while it is constantly checking the internal realtime clock. Regardless what the system is doing, it has to meet the ‘correct result at the correct time’ condition. 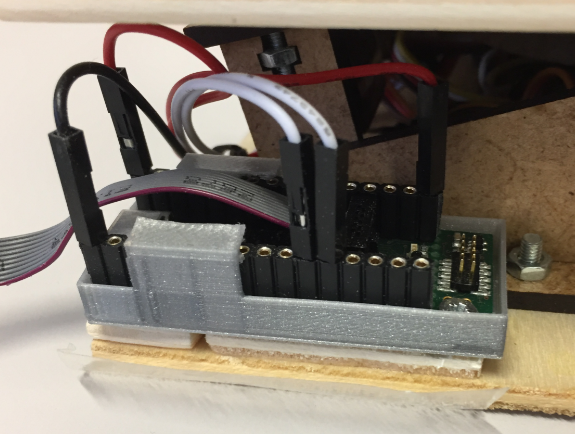 Condition 4 (In a deterministic and foreseeable way) is yet another supporting condition to meet conditions 1 to 3. It basically means that for every given state of the system it is determined what the next state of the system will be. For every given state, it is foreseeable and defined what will come in the very next state. Or in other words: the system is not behaving in a random way. This supporting condition ensures that the system can be fully described and proven in a ‘mathematical’ way to be correct and to meet the timing conditions.

Combining ‘Realtime’ with ‘Debugging’, this means that the debugger enables me to inspect and debug a to verify the device realtime capabilities, under ‘realtime conditions’:

Or in other words: beside of the target correctness verification, the debugger needs to be able to correlate the system/device timing and behavior with the ‘real world’ timing or the ‘realtime’.

Most realtime systems have timing boundaries in the milliseconds or few microsecond areas. Such timing is definitely not able to be handled with pure software based or ‘printf()’ style debugging, as that method is simply to slow and is not able to keep up with a high resolution timing. So I do not consider that ‘printf()’ style debugging suitable for realtime debugging. ‘Pin Toggling’ and ‘LED blinking’ can be used to some extend with an external hardware probe (oscilloscope/logic analyzer) capturing and measuring the signal, but the amount of data is very limited.

Usually, systems are much more complex. On a high level, I can use software tracing tools like Segger SystemView which gives visibility into the system and interrupt timing. With this, I can correlate the system timing and behaviour to the ‘real time’: 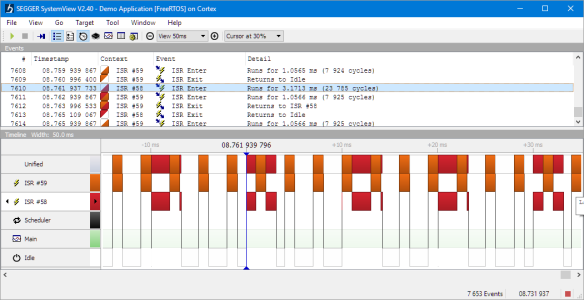 Another tool for this is the Percepio FreeRTOS+Trace which records RTOS and application events: I can see how things are working quasi-parallel, with a timing down to the micro seconds:

To get such an exact timing from the system, usually the device hardware itself provides some kind of time stamping (e.g. using a cycle count register, see “Cycle Counting on ARM Cortex-M with DWT“).

The other challenge is to get the data off the system in a timely manner. For this, typically dedicated hardware and probes using JTAG/SWD are necessary.

With a hardware JTAG/SWD debug probe the debugger can take over the device under debug, with no or minimal/defined impact on the timeliness of the target:

P&E Multilink Universal debugging a board

Using such a JTAG/SWD debug probe, I can use the debugger to control the device under debug in ‘stop-mode’:

If I need to record and inspect the target while it is running, then I need things like ‘live view’ which allows me to see variables and expressions changing:

And to solve the hard problems and to get the most visibility, I need to do full instruction and data access tracing, using dedicated trace hardware and tools:

In essence, ‘realtime debugging’ means be able to debug and inspect a device which is supposed to be realtime. For this, I need to closely map the device behaviour and execution to the ‘real world time’. For most systems, a ‘printf()’ style debugging will not be enough, as too slow and too intrusive: it affects the system behaviour too much. If I have to map the system device timing to the micro- and nanoseconds, I need something different.

For most debugging, I need deep control over the device under debug, which usually requires debugging using JTAG/SWD/SWO pins for stop-mode debugging. The next level is  to use instruction and data tracing: this gives the most and best visibility into the system and its timing, but requires dedicated tracing hardware and tools.

What is your experience, and what works best for you?

8 thoughts on “What is “Realtime Debugging”?”