Sometimes I have source files in my project which I do not want to get compiled (or excluded from build). Because as I’m using the ‘managed make’, all source files matching certain extensions (like *.c) are automatically included into the build.

To exclude a file from build, I right-click on it to get to the properties. There I can select a check box to have it excluded from the build:

That file gets marked with an icon decorator:

To include it again into the build, simply remove that check mark again.

Another way is to use the ‘Exclude from build’ context menu which does the same:

Resource Configuration to Exclude from Build 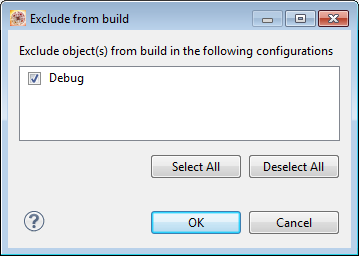 Exclude from Build with Build Configurations

This applies to all sources files to be compiled (usually *.c, *.cpp, *.cxx) and even linker files (*.ld, …). But what about header files????? The answer is that for header files it does not make any sense to exclude them: they are included by the compiler based on the include path (compiler) settings. So you cannot ‘exclude’ a single header file to be included. What you could do is to remove a path from the compiler settings, but then all header files will not be included.

15 thoughts on “Exclude Source Files from Build in Eclipse”